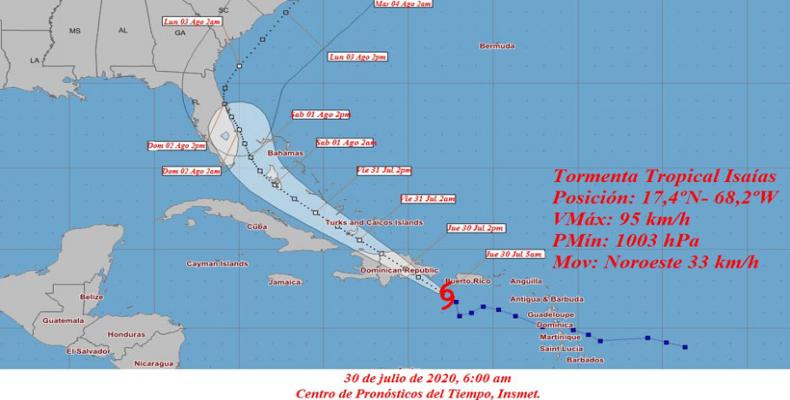 According to the information provided by the Forecasting Center of the Institute of Meteorology on Tropical Storm Isaias and considering its trajectory and possible evolution during the next hours, a gradual increase of rainfall is expected over the eastern region of Cuba, which will extend to the central region later on. Likewise, there will be strong swells with slight coastal flooding in low areas of the north-eastern coast, mainly on the northern coast of Guantánamo.

Taking into account the characteristics of this hydrometeorological event, it was decided to establish the Information Phase for the provinces of Guantánamo, Santiago de Cuba, Granma, Holguín, Las Tunas, and Camagüey as of 3:00 p.m. Thursday.

The advisory directs all local government, institutions, and economic entities of these provinces to comply with the measures provided for in their respective disaster risk reduction plans in a rational manner and pay special attention to the measures established in the New Coronavirus Prevention and Control Plan.

The government of the provinces in the central region must be kept informed.

The population is advised to keep abreast of information from the Institute of Meteorology and Civil Defence and to comply with the measures indicated by local authorities in a disciplined manner.