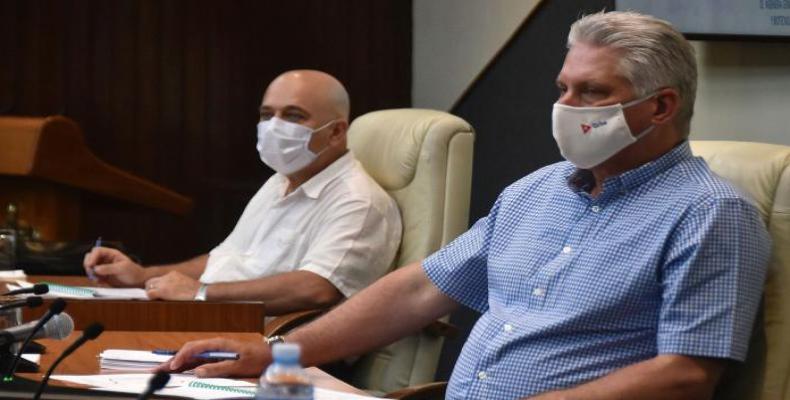 Havana, August 20 (RHC)-- The strategy for the development of "Soberana 01" -- the first Cuban vaccine candidate against COVID-19 with authorization to begin clinical trials -- was officially presented at the Palace of the Revolution during a meeting between the President of the Republic, Miguel Díaz-Canel, and the scientists and experts who have worked directly in the fight against the epidemic.

In making an exhaustive explanation, the general director of the Finlay Institute of Vaccines, Vicente Vérez Bencomo, leader of the project, explained that the study already has the authorization of Cecmed, the regulatory authority of Drugs, Equipment and Medical Devices of the Republic, and next Monday, August 24th, the clinical trials will begin.

This vaccine candidate, the researcher said, has low risks, few uncertainties and encouraging results in the pre-clinical phase.  The experimental batches induced high anti-RBD antibody titers in mice and rabbits; and based on these indicators, on July 28th Sovereign was tested for the first time in humans, precisely in three of its researchers, who in an initial evaluation also presented a high immune response.  They are currently waiting for the result of the second dose of the vaccine candidate.

Vérez Bencomo commented that phase one and two study is randomized, controlled, adaptive and multicenter, to evaluate the safety, reactogenicity and immunogenicity of the prophylactic vaccine candidate against SARS-COV-2, in a two-dose scheme.