Havana, Aug 23 (RHC)Tropical Storm Laura gained in organization during the morning and afternoon and intensifies slightly, very close to the south-eastern coast of Cuba.

The clouds and rains have continued in Guantánamo and are increasing in Santiago de Cuba and Granma, which will spread to the rest of the eastern region from the night and will be strong and intense in some locations, mainly in mountainous areas. Gradually, tropical storm-force winds of between 60 and 75 kilometers per hour will begin to influence the region, with higher gusts in Santiago de Cuba, Holguín, and Granma, which will gradually cover the rest of the region.

Strong swells will remain on both coasts of the eastern region, with light to moderate coastal flooding in low lying areas of the northern coast of Guantánamo, Holguín, Las Tunas and Camagüey provinces. From Cabo Cruz to Punta de Maisí, light coastal flooding is occurring, which will become moderate on the southern coast of Las Tunas and Camagüey from the next morning.

During the afternoon Laura has kept the clouds with heavy rains around her center and is very close to the southern coast of Guantanamo. At six o'clock in the afternoon, Laura's center was estimated at 19.6 degrees North latitude and 75.5 degrees West longitude, a position that places her about 60 kilometers south-southeast of the city of Santiago de Cuba and 150 kilometers east-southeast of Bayamo, Granma. The tropical storm continues its rapid west-northwest movement with a westward trend at 33 kilometers per hour. Its maximum sustained winds have increased to 95 kilometers per hour, with higher gusts, and the central pressure has decreased to 1000 hectoPascal.

Tropical Storm Laura will continue to move with similar speed along the seas adjacent to the southeastern coast, where it could gain something more in organization, just before penetrating the southern coast between Santiago de Cuba and Granma this evening.

The cloud bands associated with the tropical storm continue over the provinces of Guantanamo, Santiago de Cuba, Holguin and Granma. Recent observations from the Gran Piedra weather radar show the center of this cyclonic organism over the seas south of Guantánamo. The gusts of southeast winds in Baracoa have increased, with speeds of 146 kilometers per hour, at 5:02 in the afternoon. Heavy swells have also been reported on both eastern coasts, which have generated light to moderate coastal flooding in Baracoa.

The next tropical cyclone warning over Laura will be issued at 9 p.m. today. 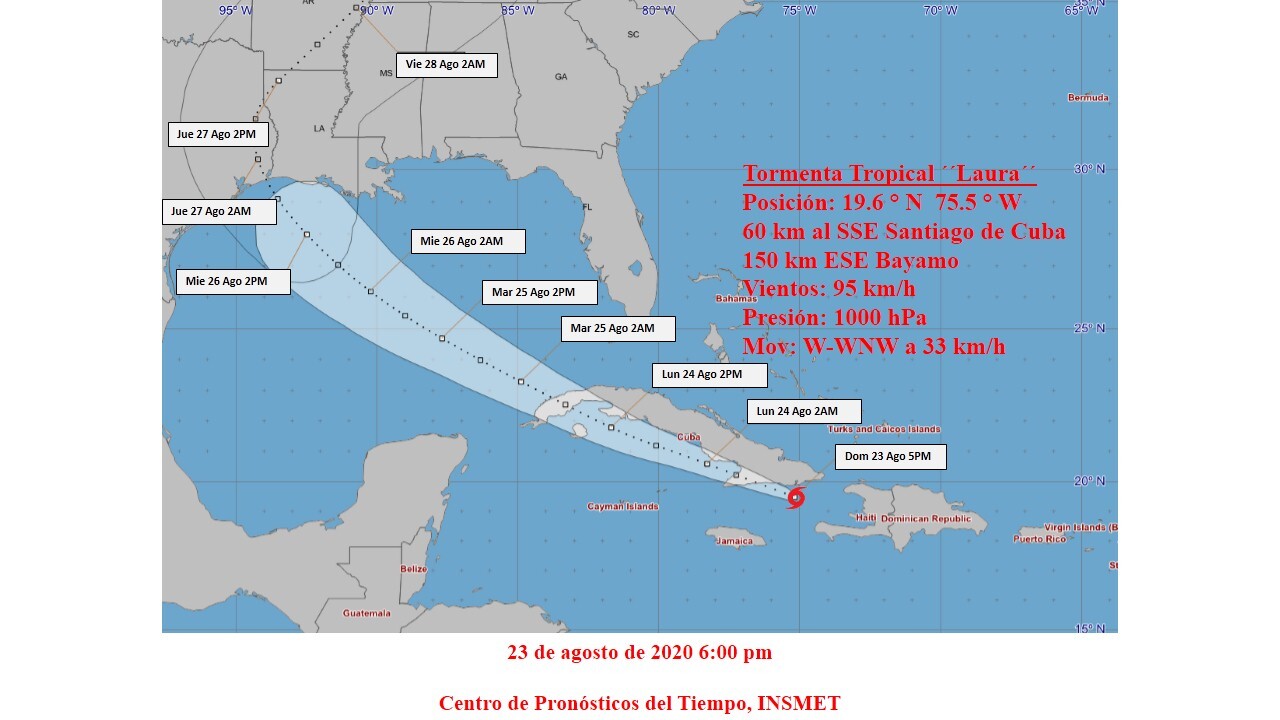