Cuban authorities inform about the economic order in the country 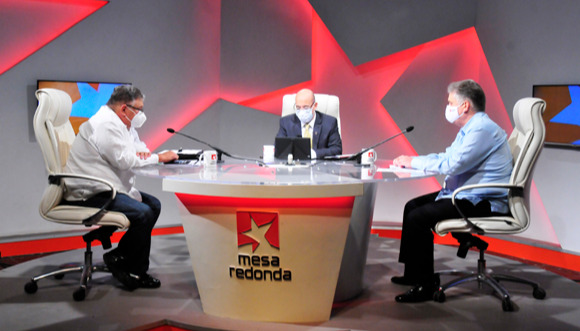 Havana, October 13 (RHC)-- Deputy Prime Minister Alejandro Gil Fernandez and the head of the Commission for the Implementation of the Guidelines, Marino Murillo Jorge, appeared on "Mesa Redonda" (Round Table) Tuesday evening to provide information on the Task Order, which includes the elimination of the dual currency and exchange rate in the country.

On the prime-time television program, the minister of economy and planning said: "It is a transformation that our economy needs and is directed to the good of our country and our population.

Alejandro Gil focussed on five aspects contained in the economic and social strategy to recover the country, and which are vital for obtaining results:

"We give a transcendental importance to this measure within the Economic and Social Strategy in which the country is working," said the minister, adding that the elimination of the monetary and exchange duality will help to resolve a set of structural problems that our economy presents.

He also recalled the words of General Raúl Castro during the closing of the tenth ordinary session of the National Assembly, in its eighth legislature, when he stated that although the elimination of the duality will not solve the problems accumulated in the economy, it constitutes the most decisive process to advance in the updating of the economic model, due to the impact it will have in all spheres of the nation.

The head of the Commission for the Implementation of the Guidelines, Marino Murillo Jorge, once again explained the complexity of the Ordering Task, which cuts across many other processes and has no turning back.  "This forces us to work with great care and technical rigor," he stated.

We have created some 14 working subgroups, in which more than 200 colleagues participate, including academics and officials and specialists from state agencies.  We have also consulted important international experts.

We have a very complicated scenario, and that has led to a very administrative direction of our economy.

Deformations in price formation.  We have a price system that does not allow the right signals to reach producers from the market.  Historically we have used a method of forming prices, which is a profit margin over costs, which has deformations, which we have been transforming in recent years, but it is very difficult to compare with international market prices.

We have a big problem with salaries.  There is a big deficit, which affects the purchasing power of wages.  Trying to solve the issue of wages, and without having done a general wage reform for a long time, a set of partial measures have been taken that have been alleviating the situation.

Minister Murrillo said that currency devaluations are not a characteristic process of the Cuban economy.  "There is no economist in Cuba of my generation  who has experienced a devaluation.  That reveals the depth of the task."