Díaz-Canel denounces evidence of a soft coup against Cuba 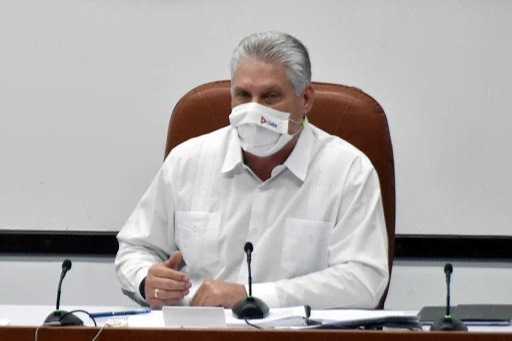 The President shared on Twitter the story of one individual involved in violent acts against a freely convertible currency store in Havana.

In his testimony on Cuban TV, Abdel Antonio Cárdenas assured that when the young people were already leaving the Ministry of Culture premises on November 27, he received a call encouraging him to vandalize the store on 11 and 4 streets in the Vedado neighborhood, tearing it to pieces, burning a policeman, or doing something atrocious".

“Cuba defends itself,' the President wrote.

The TV report showed violent individuals who joined a group of young artists during the demonstration last Friday to change the rally's character.

The investigation revealed that the peaceful gathering included citizens involved in vandalism acts against the freely convertible currency stores on the island, a measure adopted as an alternative to the U.S. blockade and the Covid-19 pandemic.

According to the video material, people financed from the United States used social media to disqualify the dialogue that took place last Friday between young people and intellectuals with directors of the Ministry of Culture.

In the investigation, Abdel Antonio Cárdenas assured that last Friday, November 27, he was contacted to join the demonstration and was incited to carry out acts of violence.

From abroad and through carefully disguised profiles, efforts are underway to articulate protests and call for provocation in public places.

In the face of the alleged clashes and oppression, voices from different profiles with fake identities would join other calls for new gatherings, the report said.