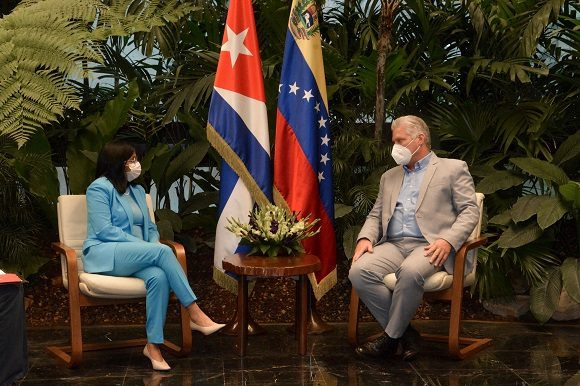 Havana, January 16 (RHC)--Cuban President Miguel Díaz-Canel Bermúdez, received Saturday the executive vice president of the Bolivarian Republic of Venezuela, Delcy Rodríguez Gómez, who is on a working visit to the island,

During the fraternal meeting, both leaders highlighted the excellent state of bilateral relations and discussed interest issues in the respective national spheres and about the regional and international situation.

Díaz-Canel ratified Cuba's invariable solidarity with the Bolivarian and Chavista people, while the Venezuelan Vice President condemned the recent inclusion of the island in the List of countries sponsors of terrorism and the intensification of the economic, commercial and financial blockade against Cuba by the US Government.

Accompanying the distinguished visitor were Asdrubal Chavez, President of Petroleos de Venezuela PDVSA, and Adam Chavez Frias, Ambassador of the Bolivarian Republic of Venezuela in Havana.

Meanwhile, Rodríguez announced the creation of a bi-national observatory to face the economic sanctions imposed against her country and Cuba.

In remarks to the press, after a  meeting with the Cuban Minister of Foreign Trade and Foreign Investment, Rodrigo Malmierca, the vice-President explained that the initiative aims at following up the unilateral coercive measures of the United States against both nations.