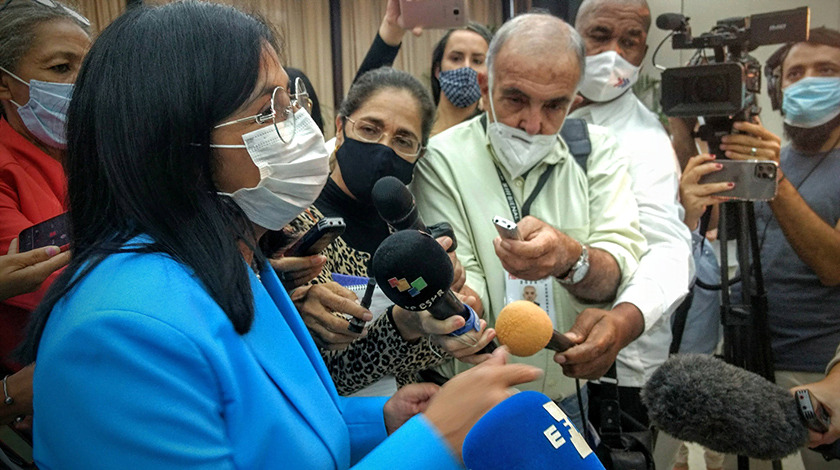 During the fraternal meeting, both leaders highlighted the excellent state of bilateral relations and discussed interest issues in the respective national spheres and the regional and international situation.

Díaz-Canel ratified Cuba's invariable solidarity with the Bolivarian and Chavista people. At the same time, the Venezuelan Vice President condemned the recent inclusion of the island in the List of countries sponsors of terrorism and the intensification of the economic, commercial, and financial blockade against Cuba by the U.S. Government.

Nothing can disturb the path between Cuba and Venezuela, nor the economic, commercial, and financial blockade by the United States, the Venezuelan Vice President told the press in Havana.

She announced the creation of a Binational Observatory to follow up on the coercive measures against both nations, about which more details will soon be disclosed.

Rodríguez Gómez reiterated Venezuela's rejection of the U.S. administration's immoral decision to include this Caribbean territory in the list of countries sponsoring terrorism.

She also qualified as brazen and piracy, the theft of the principal subsidiary of the state company Petroleos de Venezuela (PDVSA) in U.S. soil  --CITGO--, and described these actions as "drowning kicks" of the outgoing mandate of Donald Trump in its "agonizing hours."

During her working visit, Rodriguez also met Prime Minister Manuel Marrero, and with Ricardo Cabrisas, Deputy Prime Minister and co-chairman of the Comprehensive Cooperation Agreement between Cuba and Venezuela, and had encounters