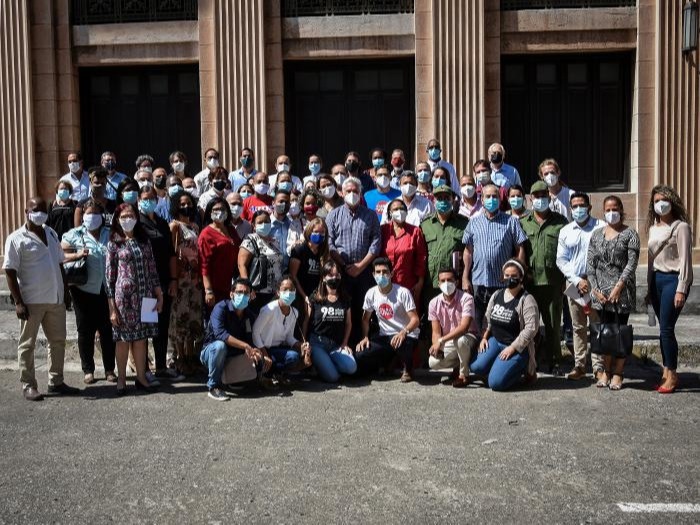 Havana, Mar 26 (RHC) Cuban President Miguel Díaz-Canel praised on Thursday the extraordinary ethical, civic and revolutionary response of the students and professors of the University of Havana (UH) in the confrontation with Covid-19.

The President held an encounter with a representation of students and workers of the institution. They addressed issues such as the link between the government and science and the academies' decisive work in this field.

At the meeting, the head of state received a special recognition presented by the rector, Miriam Nicado, and the seal of that house of higher studies.

Nicado mentioned the President's scientific vocation, which 'has allowed him to lead strategic processes in the direction of Cuba's general policy, both domestically and internationally, such as the confrontation with Covid-19'.

Likewise, she pointed out his work at the head of the monetary reform, the political and ideological work, the attention to social problems, and the priority in developing strategic sectors, among other issues.

For his part, Díaz-Canel described the UH as a vortex of debates and multiple contributions to Cuban society, always paradigmatic, not only for being the oldest university but also for being where the historic leader of the Cuban Revolution, Fidel Castro, studied.

Among the essential contributions of that institution, the head of state mentioned the computerization process and 33 government programs and the participation in the creation of vaccine candidates against Covid-19 and elaborating mathematical models to forecast the behavior of the disease.