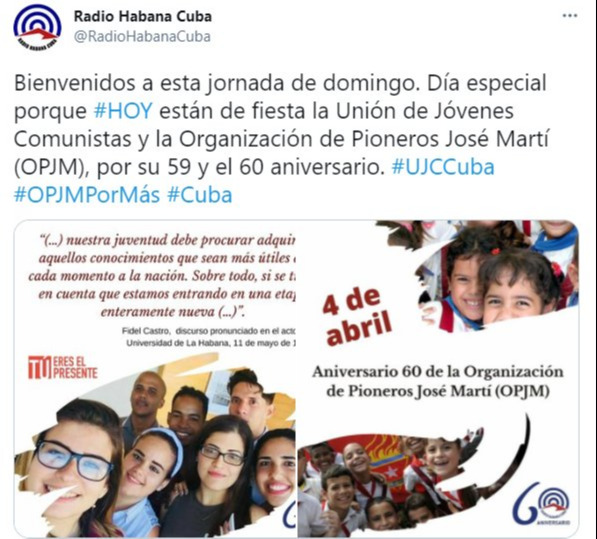 Havana, April 4 (RHC) Cuba is celebrating this Sunday the 59th anniversary of the Young Communist League (UJC) and the 60th of the José Martí Pioneers Organization (OPJM), and different activities are planned while maintaining the sanitary protocols to confront the Covid-19.

For today, a "Twitter storm" was called with the hashtag #TúEresElPresente. The action also includes a national day of volunteer work and the UJC Flag of Honor presentation, and the condition Youth for Life in collectives across the country.

On this occasion, the anniversary is dedicated to the historic leader of the Revolution, Fidel Castro, to the pioneer generation of the Cuban Revolution, and to the 8th Congress of the Communist Party of Cuba, to be held from the 16th to the 19th of this month.

On Saturday, authorities of the UJC and the OPJM paid homage to the nation's founding fathers at the Santa Ifigenia cemetery in Santiago de Cuba, in eastern Cuba.

The representatives placed floral offerings in front of the remains of National Hero José Martí; Carlos Manuel de Cespedes and Mariana Grajales, the Father and Mother of the Homeland respectively; and Fidel Castro.

The UJC is considered the vanguard political organization of the Cuban youth, a continuation of the Communist Party of Cuba and the main quarry for joining its ranks.

Meanwhile, the OPJM groups Cuban children and adolescents between the ages of five and fifteen.

Among other functions, it works in a prioritized way to develop the interest for study and a sense of social responsibility in its members.