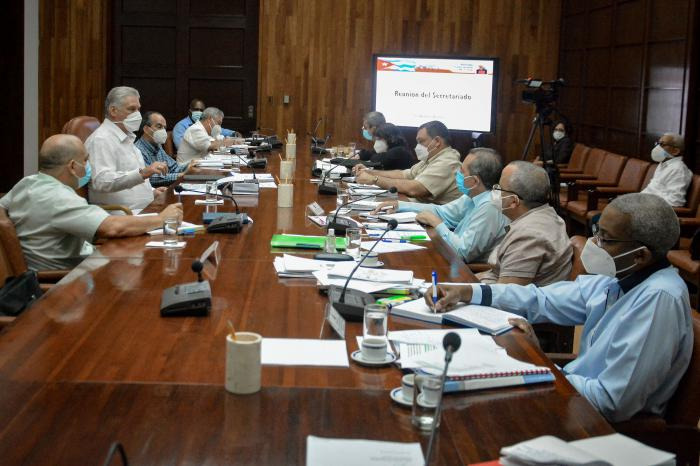 The Secretariat of the Central Committee of the PCC met on June 2, 2021.

Havana, June 2 (RHC) The first secretary of the Central Committee of the Communist Party of Cuba (PCC), Miguel Díaz-Canel, indicated to focus the organization's work on complex problems such as food production, reported the website of the Presidency.

During a meeting of the Central Committee's Secretariat held Tuesday, Diaz-Canel pointed out that the political organization must guide and control the implementation process of the 63 measures approved to encourage agricultural production.

He pointed out that agriculture, even though it is a primary sector of the economy, currently fails to position itself as such and contributes the least to the Gross Domestic Product. It does not help boost other areas either.

Díaz-Canel emphasized that this situation must be changed.

“We will not have the progress we need until we finish solving the deficiencies in this area," he said.

The president insisted on the Party's responsibility at all levels to ensure compliance with the new provisions and for producers, state and non-state, to assimilate necessary practices and concepts.

At the meeting, the Secretariat also analyzed a document on the political attention to the non-state sector, which should ensure the articulation of this sector with the rest of the actors of the economy.

In this regard, participants addressed the role of the PCC in the success of the recently announced reform approved by the Council of Ministers; the need to strengthen the direct link with the non-state actors through frequent meetings and other actions, in addition to involving them more in the development of the communities.

The Secretary of Organization and Politics of Cadres, Roberto Morales, referred to the processes of joining the ranks of the PCC by members of the private sector, the follow-up of its grassroots organizations and called to get rid of any prejudice against this sector of the economy.