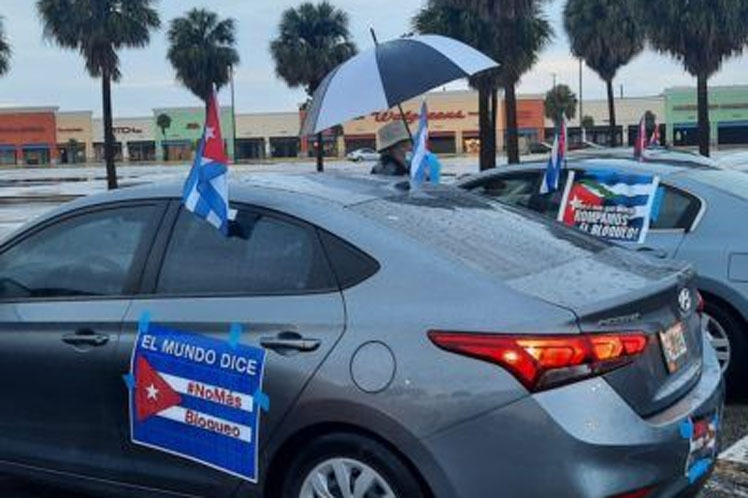 Washington, June 17 (RHC) -- Activists in ten U.S. cities are getting ready to participate next Sunday in the world caravan to reject Washington's blockade against Cuba.

According to the New York-New Jersey Cuba Sí Coalition, events are planned in Miami, Tampa, New York, and Washington DC, which hosted similar initiatives in past months.

The main coordinator of the solidarity project Puentes de Amor (Bridges of Love), Carlos Lazo, called for another world caravan against the U.S. siege on Cuba on Sunday, June 20th.

He said on Facebook that thousands of people in different countries worldwide, people of goodwill of different creeds and ideologies will also join this initiative to call for the end of the economic sanctions that seek to suffocate the Cuban people.

These caravans and events will take place on the eve of the vote in the United Nations General Assembly that will call for the end of the blockade against Cuba, he said.

This Sunday, he wrote on Facebook, we will take to the streets for the end of the blockade, for friendship, love, and life.

Likewise, he emphasized, in times of pandemic and at all times, political considerations must yield to human concerns.

For his part, the New York-New Jersey Cuba Sí Coalition leader, Ike Nahem, pointed out that the caravans against the blockade have already spread worldwide and have even reached nations in Africa, Asia, and Europe.

Likewise, he indicated that he does not miss any of these initiatives because he feels he must demand that the government of his country put an end to all sanctions, sieges, and hostile measures against the Caribbean nation.