Strong winds felt in Eastern Cuba due to Elsa's proximity 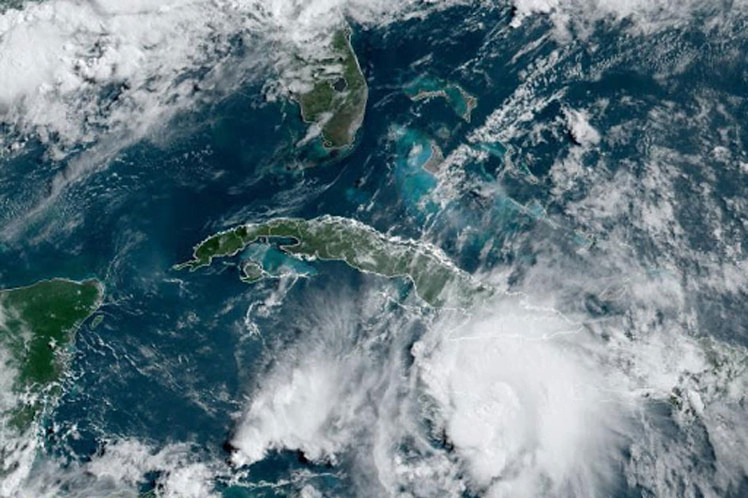 Havana, July 4 ( RHC) --Tropical Storm Elsa caused Sunday in the southeastern region of Cuba sustained winds between 60 and 70 kilometers per hour with gusts reaching 90, the Institute of Meteorology reported.

In the last few hours, Elsa continued to move west-northwest at 20 kilometers per hour, with little change in intensity, and its central pressure rose slightly to 1009 hectoPascal.

At noon, the center of the tropical storm was estimated at 18.8 degrees North latitude and 77.0 degrees West longitude, which places it 130 kilometers southeast of Cabo Cruz, Granma, according to the 15th warning of the Forecasting Center.

In the next 12 to 24 hours, tropical storm Elsa will continue with a similar course and speed of translation.

As it passes over the Strait of Colon, it could become more organized with fluctuations in its intensity, and in the afternoon hours of this Sunday, it will move over or very close to the western end of Granma and later along the seas south of Las Tunas, Camagüey and the provinces of the central region of Cuba.

Gradually, wind intensity and wave heights will begin to increase in the vicinity of the southeastern portion of Cuba.

The report points out that strong swells will continue from Cape Cruz to Maisí point, with waves between four and six meters high and light to moderate coastal flooding, mainly in Santiago de Cuba and Granma.

From the end of the morning, light flooding will move to the Gulf of Guacanayabo and later, in the afternoon, to the southern coast of central Cuba.