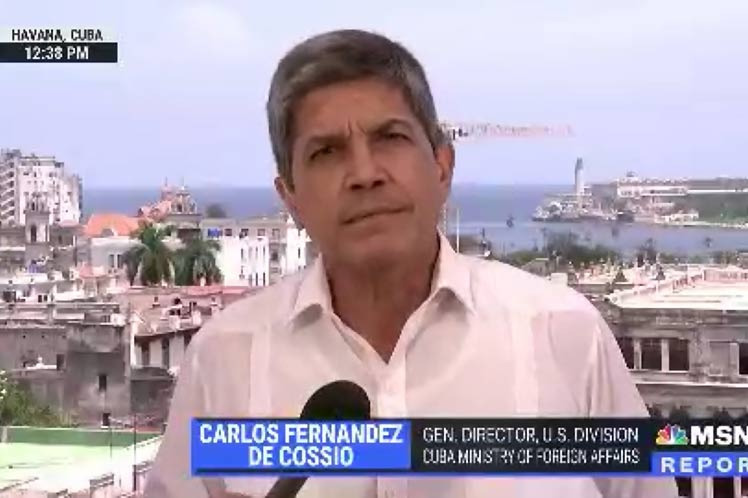 Washington, July 23 (RHC)-- The general director for the United States of the Cuban Foreign Ministry, Carlos Fernández de Cossío, denounced in an interview with MSNBC that Washington's sanctions against the island violate international law.

In his statements, the official said that the U.S. government seeks to apply national laws to a country beyond its jurisdiction, which is unacceptable.

The diplomat thus rejected the most recent measures of the Office of Foreign Assets Control (OFAC), which issued provisions against the Minister of the Revolutionary Armed Forces (FAR), Army Corps General Alvaro Lopez Miera, and the National Special Brigade of the Ministry of the Interior (Minint).

These actions have little practical impact since the Minister of Defense has no assets or bank accounts in U.S. territory, nor does he intend to go there for tourism, commented Fernández de Cossío.

Likewise, the Cuban government representative reiterated that the United States is trying to provoke a migratory crisis, an 'irresponsible' attitude that Havana has been warning about for months and that it is possible to prevent.

In addition, he asserted that Internet access is not interrupted on the island, only some services were sporadically and intermittently suspended due to attacks from the networks with the participation of Washington and large technology companies.

As recognized by experts, this is an operation against the Antillean nation that uses the virtual world to spread false news and urge mobilizations. It is a disinformation campaign, he said.

He said that so far, the administration of President Joe Biden has not responded to the requests made in recent weeks by the Cuban Foreign Ministry regarding its involvement in the events of July 11.

On the other hand, he explained that the trials and measures against those who committed acts of vandalism in the riots are part of the Cuban penal system, 'there is nothing unfair or extraordinary; everything is done following the law.'

In Cuba, there are no disappeared, nor tortured, nor murdered; these are lies repeated in the U.S. media, clarified Fernandez de Cossio.

On the subject of remittances, he denied the statements made by Republican Senator Marco Rubio and guaranteed that the government does not tax them. The agencies in charge of the transfer, such as Western Union, charge a commission.

They are trying to justify and find a pretext to adopt measures that, in practice, affect the people to stimulate a feeling of dissatisfaction and nonconformity with the government to call for protests in the streets, the diplomat pointed out.