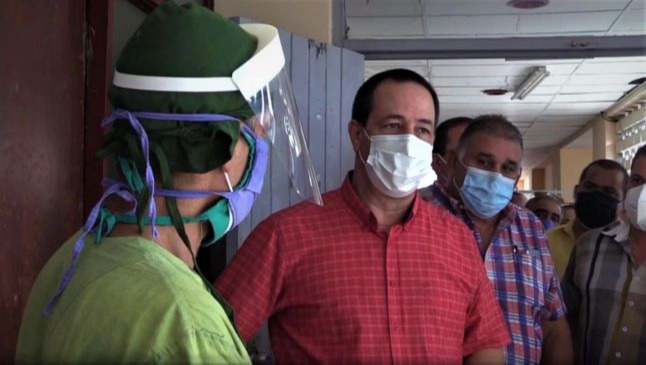 On Facebook, Portal provided feedback on Thursday on his presence of several days in the territory with the highest number of infections and that have reported 15,600 people diagnosed with COVID-19 in the last 15 days.

The minister said that during the visit, they evaluated the measures implemented to contain the epidemic and analyzed new actions that could be adopted to support the health services.

He affirmed that during the visit, he appreciated the immense commitment of Pinar del Río's health professionals to fight against the virus amid the worst scenario that the province has faced since the beginning of the epidemic, with figures that are worrying and that call for reflection every day.

"The Ministry of Public Health staff and specialists are permanently supporting the management of the processes related to the control of the disease," he wrote.

Together with the province's workers, more than 200 health professionals have come from different provinces to Pinar del Río to lend their solidarity.

Many of them had recently arrived on the island after working in other countries and immediately joined the battle against the coronavirus in the westernmost Cuban province.

He considered that the actions implemented in Pinar del Río should have a significant impact on the containment of transmission. At the same time, mass vaccination of the population, including pediatric age groups, is being carried out there.

Portal Miranda insisted on the need for the population to strictly comply with all sanitary measures and sustained control of the epidemic by local authorities.