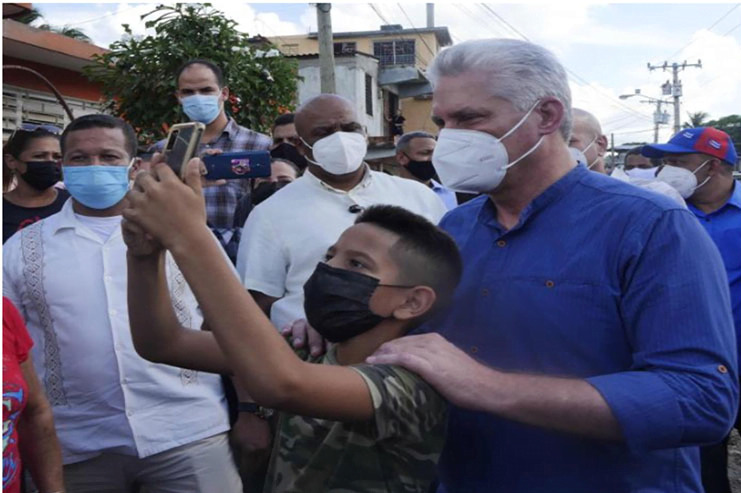 A child asks President Miguel Diaz-Canel for el selfie during his visit on November 11
to Pedro Pomba, a vulnerable neighborhood in Bayamo, in eastern Cuba.

Havana, Nov 12 (RHC)-- Cuban President Miguel Díaz-Canel ratified the attention program to communities considered vulnerable as an important part of the construction of socialism in the Caribbean country.

Through his official Twitter account, the President recalled that "the Revolution also begins in the neighborhood," which is why perfecting the transformations is another way of working with several essential concepts of the nation's political, economic, and social system.

The dignitary recognized that the initiatives depend on collective thinking and action, "to build in each locality a system that contributes to the solution of the problems that most affect them".

In this sense, he pointed out the program's progress in La Cecilia, a community located about six kilometers from the city of Guantánamo, which is already witnessing the works for the improvement of water supply, roads, drainage, and housing conditions.

"Cuba is the same and is different in every community we visit," Diaz-Canel stressed.

With the support of ministries, mass organizations, and local entities, the Caribbean nation prioritizes a program for the recovery of areas, improvements in communications, communal services, transportation, and health in vulnerable areas.

On several occasions, the President called for systematizing the transformation actions and strengthening the work to improve the quality of life of the people.