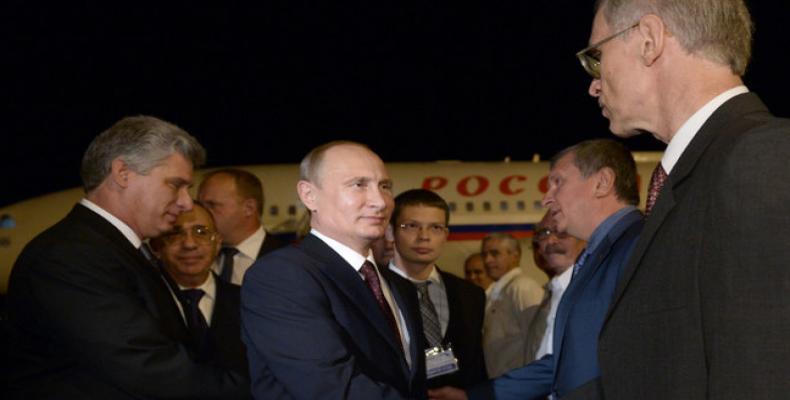 Havana, July 11 (PL-RHC) -- The President of the Russian Federation, Vladimir Putin, arrived in Havana early Friday morning for an official visit to Cuba, the first leg of a Latin American tour that will also take him to Argentina and Brazil.

In Cuba, Putin is expected to meet President Raul Castro. They will discuss the progress of an agreement signed last year which cancels 90% of Cuba's $35.2 million Soviet-era debt to Russia and channels the remaining 10 percent into joint investment projects in the country.

The deal was ratified by the upper house of the Russian parliament on Wednesday. Russia is involved in oil exploration offshore and began drilling a development well last year.

According to diplomatic sources in Havana, Putin will also be decorated with the Jose Marti Order, the Cuba's highest distinction, instituted in 1972 and granted to Cuban citizens, foreigners and heads of State or Government, for great deeds in favor of peace and humanity.

Russia and Cuba established diplomatic relations in October 1942. The regime of Fulgencio Batista's dictatorship, from 1952 to 1959, broke off ties in 1952. Cuba and the former Soviet Union re-established relations on May 8, 1960.

The Eurasian nation has maintained a historic position of condemnation of the U.S.-imposed economic, trade and financial blockade on the Caribbean island. Russia and Cuba have maintained excellent bilateral relations, and there are traditional ties of friendship and respect between both nations and peoples.