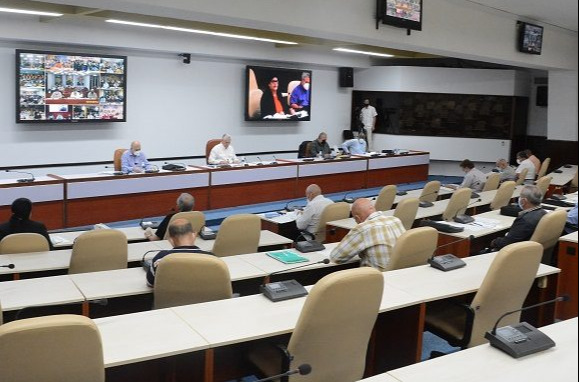 Havana, February 8 (RHC)-- The First Secretary of the Central Committee of the Communist Party of Cuba (CC-PCC) and President of the Republic, Miguel Díaz-Canel, has called for a turnaround in the country's sugar harvest in view of the difficulties faced by this important productive sector during the current harvest.

The president headed a meeting to analyze the situation of this activity, which has had an unfavorable performance since the beginning of the season.

Cuban authorities say that the sugar harvest did not start well and its evolution has not been positive either, due to multiple causes, both objective and subjective, and it is the latter that have made the difference in the results.

A note from the Presidency indicates that the meeting also included a rigorous analysis of the causes that led to this situation and the perspectives and strategies of each one of the provinces to overcome this moment.

Díaz Canel pointed out that "a response to the harvest" is needed, and although he acknowledged the existing resource problems, he insisted that the weather behaved favorably, but what was planned was not achieved.

The exchange was carried out by videoconference with the highest authorities of the provinces where the harvest is advancing, and with the participation of the Vice President of the Republic, Salvador Valdés Mesa; the Prime Minister, Manuel Marrero Cruz, and Roberto Morales Ojeda, Secretary of Organization of the CC-PCC.

After a recent tour of sugar factories in different provinces, Julio Andres Garcia, president of the Azcuba Sugar Group, said in the meeting with the country's top leadership that the first problem is one of discipline.

This is reflected in the fact that with the available resources, eight or nine percent more could be produced, which would be equivalent to milling 80,000 tons of sugar cane per day, but this has not been achieved.

García illustrated that there are 12 industries at risk of not being able to cut in April all the cane foreseen, and in many cases the cause is associated with discipline in the harvest.

Díaz-Canel pointed out that the country's situation does not admit discipline problems and instead it is necessary to raise the work spirit to move forward and contribute more.

He called for the adoption of measures to make better use of resources, plan quickly how to recover the arrears and devote time to plant enough sugarcane so that the next harvest also begins to change the situation in relation to the levels of sugar production and the deterioration of the plantations.

He considered it important to analyze the situation from the PCC, since these issues were widely discussed in the most recent Plenary Session of its Central Committee, in which 93 measures were approved to save the sugar harvest.