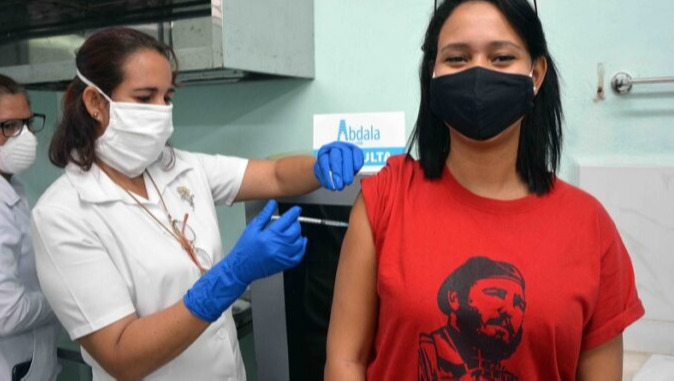 Cuba is currently number one among developing countries in terms of total vaccination coverage. Photo: File/RHC

Havana, February 12 (RHC)-- The specialized site Pandem-IC from the United States recognized Cuba's performance in terms of anti-COVID-19 vaccination, adding that the Caribbean nation stands out both among developing countries and in the world as a whole.

According to an article entitled "How is the world's best-vaccinated developing country doing?"  the island is doing a stellar job, having outperformed its upper-middle-income peers, now nearly completing the primary vaccination cycle and well ahead of most other nations.

The report praised Cuba's ability to produce its own immunizers: 'Abdala', 'Soberana 02' and 'Soberana Plus'.

"When it comes to total vaccine coverage, Cuba is currently number one among developing countries. That is a remarkable achievement. It is the result of a solid performance in terms of primary vaccination coverage (where it ranks number 3) and the number one spot in booster coverage," the publication noted.

In a comparison between the Omicron and Delta variants, Pandem-IC reported that new cases in Cuba did not exceed or even approach their previous peak, which contrasts sharply with most other countries in the world.

He added that the impact on mortality has been small, a pattern more common internationally.

"Cuba's experience has been truly remarkable," the media outlet considered, adding that thanks to the development and development of domestic immunogens it was able to increase vaccine coverage very quickly.

"The success of vaccination seems to have achieved very good results, especially on the mortality side. (...) the results are impressive," he praised.

The specialized U.S. site emphasized that "Cuba's story is one we would like to see repeated in other parts of the world. It is critically important that vaccine production be less geographically concentrated and that manufacturing capabilities be more widely shared."