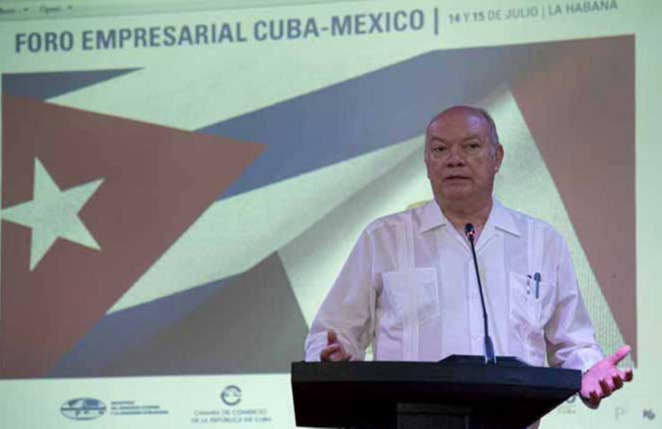 Havana, Jul 15 (RHC)-- Cuban Minister of Foreign Trade and Investment (MINCEX) Rodrigo Malmierca said Friday that the Cuba-Mexico Business Forum, which concluded with positive results, should be the starting point for expanding ties at the upcoming Havana International Fair.

In his closing remarks at the event, the minister stressed that the two days of exchange of experiences between Cuban and Mexican business people showed the untapped potential of both parties.

Malmierca stressed the "affectionate and very warm" greeting sent by Mexican President Andrés Manuel López Obrador to the meeting, and the presence of Cuban President Miguel Díaz-Canel at the inauguration, reaffirmed the political will of the two governments to expand and consolidate economic and trade relations.

"The Forum fulfilled the objectives outlined in its organization: to put in direct contact the business community of both countries to promote the development of bilateral economic relations," he said.

He immediately invited those present to participate in the next Havana International Fair.

He also praised the signing of 12 agreements between Mexican and Cuban entities (among the latter some micro, small and medium-sized enterprises, MSMEs) in the textile, food, information technology, renewable energy, culture and environmental, professional, and academic services sectors.

Malmierca assured that the agreed documents include Mexican investment in Cuba, Cuban exports to Mexico -and vice versa- and the participation of local development projects.

The agreements signed by Makro Soluciones Tecnológicas de México with several Cuban companies such as Inversiones Gamma S.A, Copextel, and Solintel S.A for the transfer of information and technology, telecommunications equipment and services, technological infrastructure, and specialized services stood out.

The two-day Cuba-Mexico Business Forum brought together representatives of more than 80 companies from the northern country and 150 Cuban companies from the agri-food, logistics, tourism, transportation, biotechnology, and pharmaceutical industries, renewable energies, and culture.