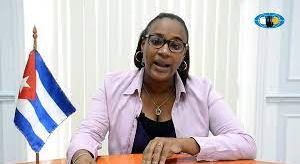 Quito, Oct 1 (RHC) Cuban Deputy Minister of Economy and Planning Mildrey Granadillo, presented the social policies of the Revolution as a way to fulfill the 2030 Agenda, at the XIV Ministerial Forum on Development of Latin America and the Caribbean, in Cuenca, Ecuador.

During the second and last day of the event, the Vice Minister presented the experiences of our country aimed at achieving the Sustainable Development Goals proposed by the UN.

To achieve this goal, the participants, who represented 25 countries in the region, signed the so-called Cuenca Declaration, which concluded the event.

The document agrees to promote inclusive and sustainable growth, reduce poverty and the vulnerabilities of citizens, and enhance their fundamental role in building resilience.

The participants also defined the need to promote public policies and alliances that stimulate the sustainable development of the productive sector focused on balancing economic, social, and environmental achievements.

Another of the agreements reached, according to the Declaration, was to develop more regional cooperation initiatives to address systemic problems, such as malnutrition caused by the food crisis.

We have defined the policies that will allow us to mitigate inequalities and achieve sustainable development for our populations, said Estaban Bernal, Ecuador's Minister of Economic and Social Inclusion. This ministerial forum, hosted by Ecuador for the first time, has been held since 2007 under the auspices of the United Nations Development Program and the Economic Commission for Latin America and the Caribbean.

In 2023, the fifteenth edition of the meeting will take place in Santiago, Chile. (Source: Press)