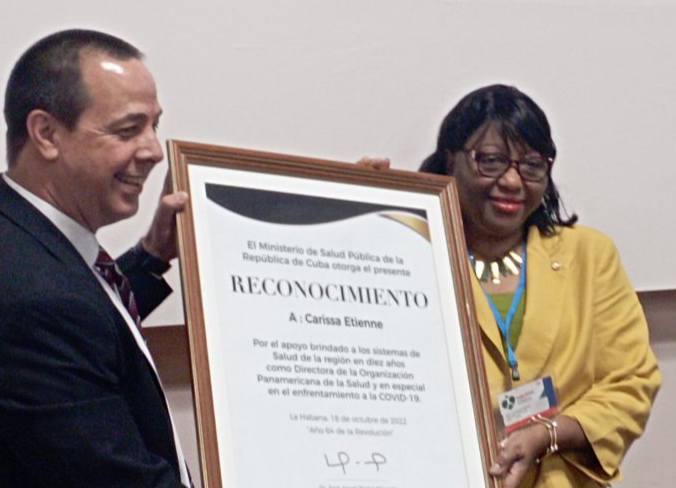 Portal thanked the support provided by Dr. Etienne to the Caribbean nation.

Havana, Oct 19 (RHC) The Cuban Ministry of Public Health (MINSAP) recognized Dr. Carissa Etienne, director of the Pan American Health Organization (PAHO), for the support provided to the region's health systems in 10 years of work, and especially in confronting COVID-19.

At the Havana Convention Palace, the representation of this international organization in Cuba was also honored for its contributions to Public Health and its commitment to life and the peoples of the Americas.

Speaking at a special session for the 120th anniversary of PAHO, as part of the IV International Convention 'Cuba-Health 2022', the head of MINSAP, José Ángel Portal Miranda thanked Etienne for her support to the nation.

He pointed out that many of the actions that mark common lines were carried out in the last decade, with Carissa as head of that organization.

The minister referred to the joint work between the health agency he heads and PAHO over the years, and the latter's contribution to the immunization of the population, the mobilization of funds in the face of natural phenomena, and especially in the fight against the pandemic.

PAHO/WHO collaborating centers, and highlighted the link between the precepts of the organization and the National Health System.

Portal Miranda said that the historical leader of the Cuban Revolution, Fidel Castro (1926-2016), was the original driving force behind relations with PAHO and ratified the will to strengthen joint action, based on respect, solidarity, and cooperation.

For her part, Dr. Etienne thanked the MINSAP for the recognition, and Cuba for its leadership and commitment to the mission of the entity she directs. She also insisted that health should be at the center of the work of the countries in the region. (Source: ACN)