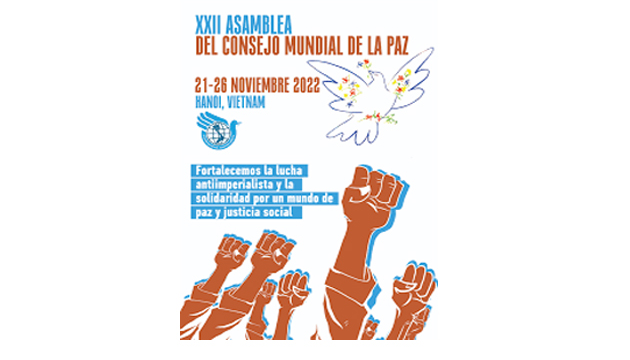 Hanoi, Nov 25 (RHC) The heroic triumph of the Cuban Revolution in more than 60 years of struggle against the aggressive and criminal U.S. blockade was highlighted in the Final Declaration of the XXI Assembly of the World Peace Council, which concludes today in Hanoi.

The text reflects on the support of this movement to the Cuban people in their confrontation with the economic, financial, and commercial siege imposed by successive U.S. governments.

It also advocates the end of the illegal occupation of part of the island's territory by the U.S. naval base established in Guantanamo 119 years ago, and its return to its legitimate owner, the Cuban people.

In recent years, Cuba has once again demonstrated its skill and determination, and moral superiority with its extraordinary achievements in combating the Covid-19 pandemic, developing efficient vaccines of its own, and providing assistance to dozens of people around the world.

The Declaration also extended its complete solidarity to the people of Puerto Rico in their struggle for independence and self-determination and stressed the importance of defending the Bolivarian process in Venezuela against permanent attempts at destabilization and unilateral sanctions.

They also underscored the importance of the proclamation of Latin America and the Caribbean as a zone of peace and welcomed the triumph of the Brazilian people in last October's presidential elections, won by the founder of the Workers' Party, Luiz Inácio Lula da Silva.

This victory confers new impetus to the anti-imperialist struggle in Latin America and other continents, considers the text.

The manifesto emphasizes that in a period of deep and continuing economic, social and ecological crises the world faces new dangers and threats to peace as a result of growing imperialist interference and aggression.

It deplores the incessant and provocative expansion of the North Atlantic Treaty Organization (NATO) and demands the dismantling of all military bases in the world, as well as the total demilitarization of outer space, among other aspects.

On the previous day, the XXI Assembly of the World Peace Council elected the new Executive Committee composed of 40 members, who in their first meeting endorsed Pallab Sengupta, from India, as the new president of the organization.