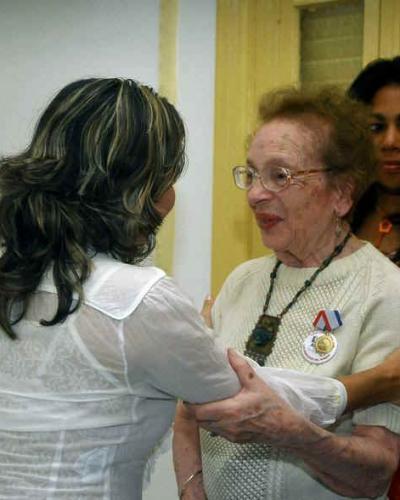 Havana, November 12 (RHC)-- The Cuban Medal of Friendship was awarded in Havana on Monday to  Argentinean social activist Amalia Edith Glaif for her permanent and devoted work in support of Cuba.

With visible emotion, the 83-year old Argentinean social and community activist received the medal granted by the Council of State of the Republic of Cuba from the hands of Kenia Serrano, President of the Cuban Friendship Institute.

Serrano said that “it is pinning a medal on another medal”, referring to the outstanding Argentinean social activist, who since 1959 has been a devoted promoter of Argentinean solidarity with Cuba.

In 2000, Glaif was a founder the Argentinean Committee for the Release of the Five, the Cubans unjustly sentenced in the United States for defending the integrity of Cuba in face of schemes and attacks from CIA-led violent extremist groups in Miami.

The outstanding Argentinean revolutionary woman will attend an International Seminar opening this Wednesday in Holguin, Eastern Cuba, demanding the Liberation of the Cuban antiterrorist fighters.