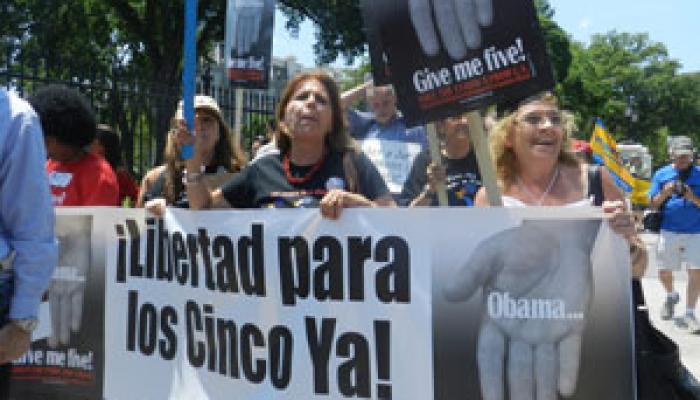 Havana, November 21 (RHC)-- Hundreds of messages from all over the world demand from the web site voicesforthefive.com the immediate release of Cuban Anti-terrorists sentenced in Miami 15 years ago and reject the illegalities set up at their trial.

According to museums director Gilbert Brownstone, the Five were severely sentenced for just monitoring aggressive actions against Cuba launched by CIA-led terrorist groups based in Florida.

The Five, as Gerardo Hernández, Ramón Labañino, Fernando González, Antonio Guerrero and René González, are known internationally were the victims of a conspiracy by the US Government.

World solidarity with The Five foresees the convening of an International Investigating Committee on March 7th and 8th next year, at the Law Society in London, an initiative that has already received the support of over one hundred lawyers and other personalities around the world.

Jan Fannon, Assistant General Secretary of the International Association of Democratic Jurists, said the members of the Committee will review on March 7th the Court’s process based on the right of Cuba to defend itself, as is the right of any country subjected to aggression.

On the second day, March 8th, the Committee will review, identify and underline the flagrant illegalities committed at the Miami court that sentenced the five Cubans.

The renowned international jurist said the Committee hopes that, in face of all these illegalities, many more people around the world will join the international crusade to obtain the release of the Cuban heroes jailed in the United States for just monitoring terrorist CIA-led activities in Miami against the Caribbean island.