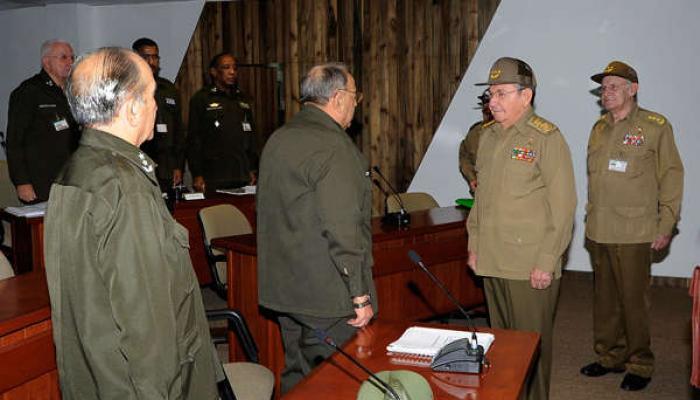 Havana, November 21 (RHC)-- Army General Raul Castro, President of Cuba and of the National Defense Council, visited the command post of the Interior Order and Security Body, following the start of Bastion 2013 military exercises throughout the island.

According to an official news release, Colonel Emir Mesa Corona, second chief of the Interior Ministry Direction, reported to Raul Castro about activities scheduled to guarantee the first stage of the exercise by the unities and institutions of the Interior Order and Security Body.

The Army general recalled the experiences contributed by Cuban independence wars and international military conflicts that took place since the Second World War, in Libya and Syria.

On Wednesday, Raul Castro presided over a meeting of the Economic and Social Body of the National Defense Council. The chief of that body, Adel Yzquierdo, who is government vice-president reported on the state of the economy in the current stage of the exercise, the official release explains.

The Cuban President addressed the need to integrally analyze the important decisions demanded by the country's economy, the crucial foresight of these issues and their coherence with the implementation of the guidelines adopted by the 6th Congress of the Cuban Communist Party.

The meetings were attended by the vice presidents of the National Defense Council Jose Ramon Machado Ventura and Miguel Diaz-Canel, as well as by corps army generals Abelardo Colome Ibarra and Leopoldo Cintra Frias, by other members of the Council of Ministers and by high-ranking military offices.

Bastion 2013 will run through Friday, November 22nd, and will conclude with two national defense days over the weekend.