Cuban Anti-terrorist Urges to Revert the Situation of The Five 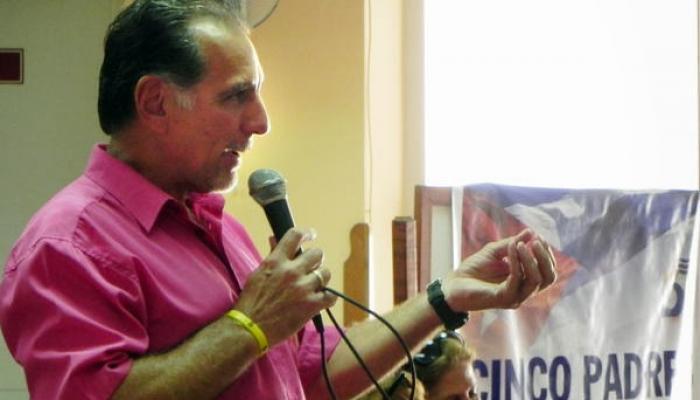 Havana, November 22 (RHC)-- The decision to take us to trial and make a mockery of American justice once and again must be overturned by all those who believe in Justice and Democracy in the United States, said Rene González, one of the members of the Cuban anti-terrorist group  who was sentenced on false changes sentenced in a corrupt trial in Miami in 1998.

The trial was corrupt from top to bottom, Rene Gonzalex said at the international law forum meeting in Havana, the Cuban anti-terrorist recalled that corrupt US Government officials condemned him and four other Cubans –Gerardo Hernandez, Antonio Guerrero, Ramón Labañino and Fernando González— with trumped up charges.

Our only crime –if you can describe it by that term-- was to monitor in Miami violent actions launched against Cuba by terror groups funded and directed by the CIA.
Hundreds of innocent Cubans, including women and children, have died as a result of those violent actions, Rene said.

These included the mid-air bombing of a Cubana Airlines passenger plane in October 1976 in Barbados. All seventy six passengers and crew aboard died.

The trial against The Five was conducted in an atmosphere lacking justice and fairness, with a paid press blaring every day against the defendants.

Rene added that that international conditions at the time favored completely the corrupt clique that orchestrated the trial.

But things have changed, the Cuban anti-terrorist said, and there is now a favorable climate for the impartial review of the case and the release of the four remainder prisoners, innocent victims of political manipulation by terror groups in Miami.