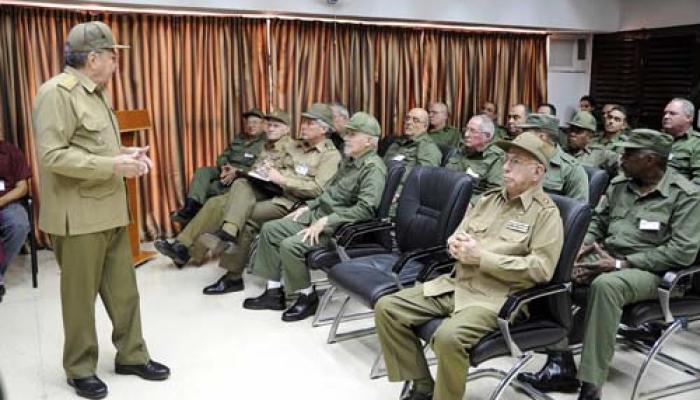 Artemisa, November 22 (RHC)-- The Chairman of the Cuban National Defense Council, General of the Army Raúl Castro, visited the Provincial Defense Council of Artemisa, South East of Havana, which is participating in a National Bastion Defense Exercise for the first time since it became a province on the 9th January,  2011.

Raul Casto was met by José Antonio Valeriano, Chairman of the Artemisa Provincial Defense Council, who let him know how successful the exercise was in terms of its acceptance by the population and the correct persecution of the defense tasks and maneuverers.

The exercise, the Artemisa Defense  Council Chairman said the exercise has allowed the population and the leading defense ranks to couple their activities and train for the National Day of Defense.

Raul emphasized the military importance of Artemisa Province as a defender of the Havanas South Eastern flank.

During his visit to Artemisa, the Army General paid respects to the local heroes who participated in the 26 of July, 1953 attack on the Moncada Military Barracks, then a Batista dictatorship stronghold in Santiago de Cuba.

Although if failed, that heroic action by a small group of youths commanded by then young revolutionary Fidel Castro, became a rallying point for the successful guerrilla war who later toppled the US backed dictator, on January 1st, 1959 .
Their heroic action is now forever remembered, appreciated and thanked by generations of Cubans.