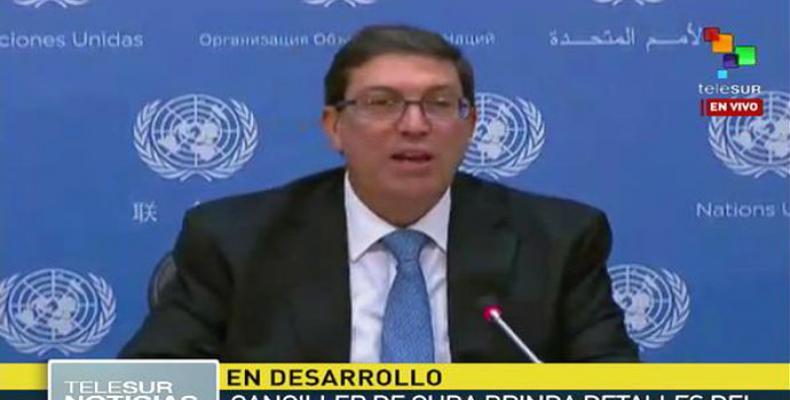 United Nations, October 28 (RHC)-- Cuban Foreign Minister Bruno Rodriguez said in New York that the negative vote by the U.S. against the Cuban resolution demanding the lifting of the economic blockade on the island does not fit in Washington´s discourse about working to lift the siege and described the vote as disappointing.

“You would expect to see tangible facts in the enforcement of the policy announced by President Barack Obama, active actions at the U.S. Congress on this issue and a vote consistent with the U.S. international legal obligations, but this did not happen and it is disappointing,” the foreign minister noted.

Foreign Minister Rodriguez spoke to reporters shortly after the international community condemned the over-50-year U.S. economic, commercial and financial blockade of Cuba, with 191 out 193 UN member states voting in favor of the Cuban resolution demanding the end of Washington's hostile Cuba policy. Only the United States and Israel voted against the resolution and therefore in favor of the blockade.

This was the twenty-fourth occasion that the overwhelming majority of the world community votes against the U.S. blockade since 1992.

At the plenary session on Tuesday, the U.S. representative alleged that the Cuban resolution did not reflect the current scenario of U.S.-Cuba bilateral links and recalled that President Barack Obama has repeatedly asked the U.S. Congress to lift the blockade, which the United States calls an 'embargo.'

“We have to judge according to the facts and since December 17, we have not seen significant modifications on the enforcement of the blockade,” said Bruno Rodriguez who recalled recent fines imposed by Washington on European entities, the withholding of the first pay by Sprint Company to initiate direct telephone calls between the two countries and the obstacles posed on financial transactions supporting charter flights, the only one currently operating.

Based on the facts, Bruno Rodriguez described as inconsistent the reasons put forth by Washington to once again justify its isolated stance, though he discarded his reply to U.S. representative Ronald D. Godard.