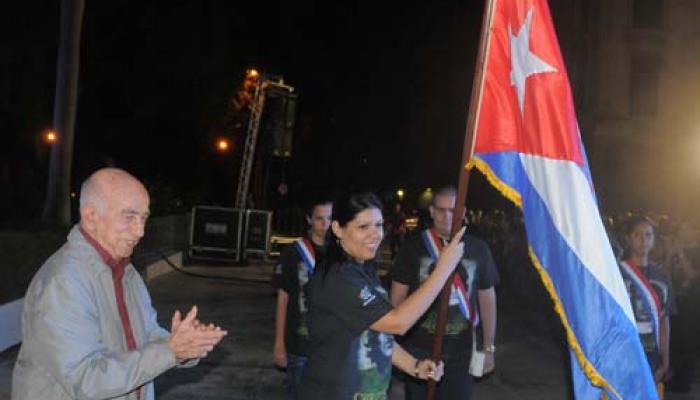 Havana, December 3 (RHC)-- The 200-strong Cuban delegation participating in the 18th World Festival of Youth and Students in Ecuador received the National Flag to carry to the event on December 2nd, the Day of the Cuban Armed Revolutionary Armed Forces.

The Second Secretary of Cuba's Communist Party and Cuban Vice President Jose Ramon Machado Ventura handed over the flag to Yuniasky Crespo Baquero, first secretary of the Young Communist League, at Museum of the Revolution in Havana. It is also the location where the Granma yacht, bringing 82 revolutionaries headed by Fidel Castro in 1956, is being preserved.

The World Festival of Youth and Students will take place December 7th through the 13th in Quito and it will be dedicated to Ecuadorian leader Eloy Alfaro and to Boliviarian leader Hugo Chavez, as well as to Ghana's Independence Hero Kwame Nhkrumah.