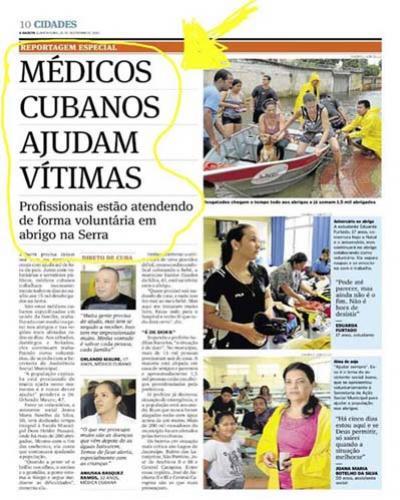 Espiritu Santo, December 26 (RHC)-- The Brazilian newspaper A Gazeta, published in the state of Espíritu Santo, has praised the outstanding job being performed by Cuban doctors in that area attending to the victims of torrential rains that have resulted in thirty deaths and scores of injured people.

Eleven Cuban doctors are working the area where formerly no Brazilian physician were to be found. The newspaper quoted doctor Orlando Maure as saying: “The local population needs help and it is our duty to help them.”

In the locality where Doctor Maure is working, more than 15,000 persons had to abandon their homes and seek refuge in higher ground after the torrential rains caused extensive flooding due to the overflowing of local rivers.