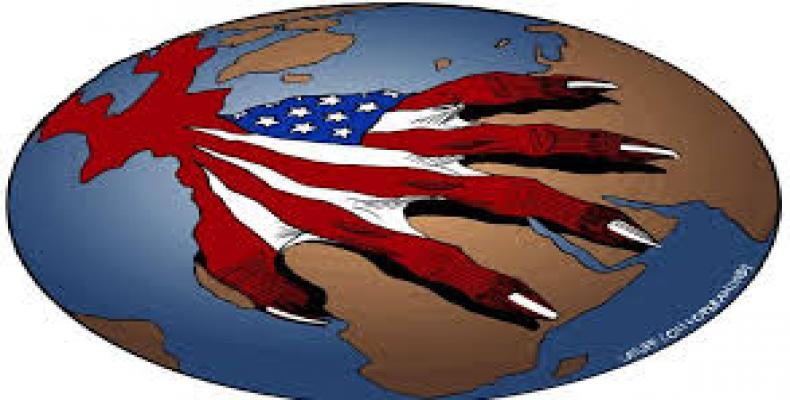 Neocolonialism and the neocolonial world-system

In our program on Imperialism and Revolution to this point, we have seen that the spectacular economic ascent of the United States from 1776 to 1968 was made possible by the availability of markets for food products and manufactured goods in the slaveholding Caribbean and the U.S. South from the sixteenth to the nineteenth centuries, and the production and sale of military arms during the two world wars and the subsequent Cold War of the twentieth century. And we have seen that concentration of capitalist enterprises in the second half of the nineteenth century enhanced their productive capacity, making necessary and possible imperialism, or a foreign policy of interfering in the internal affairs of other nations, in order to attain access to their markets for the sale of surplus agricultural and manufactured goods, and to attain access to their raw materials and cheap labor for expanding the production of U.S. corporations. Imperialism is carried out through various methods, including direct military intervention, military threats, bribery of public officials, foreign aid, excessive and high-interest loans to create debt, and economic sanctions.

U.S. imperialist policies were developed with respect to nations that were formally independent nations. Going beyond the capturing of markets and the obtaining of raw materials, the policies sought to establish the presence of U.S. agricultural, mining, and light industrial corporations as well as banks, a presence that undermined the sovereignty of nations, even as public discourse affirmed the principle of the sovereignty of nations, and structures and customs of formal independence were maintained.

U.S. imperialism, therefore, was accompanied by neocolonialism, a term that was popularized in the 1960s by Kwame Nkrumah, President of Ghana, who alerted the world that the African nationalist movement had attained political independence, but the former colonial powers had the newly-independent nations of Africa in an “economic stranglehold.”

When the United States was at the height of its power (from 1945 to 1965), it dominated supposedly independent nations primarily through economic control, by means of ownership of productive and commercial enterprises as well as banks, with military power being an important but secondary component. In the supposedly independent nations, the national economic elite was subordinate to U.S. corporate interests, and the state was dependent on U.S. aid and support. As a result, the United States was able to ensure that commercial regulations enacted by the supposedly independent state favored U.S. interests in access to markets, raw materials, and cheap labor and in a corporate and banking presence.

The mechanisms of neocolonialism during the period 1945 to 1965 can be described. They include, first, a continuation of the economic relation imposed by conquest and force during the colonial era, in which the colony exports raw materials, on a base of forced labor, to the colonializing nations, and imports their surplus manufactured goods; secondly, rule by large and concentrated transnational corporations, transnational banks, and international financial agencies, which control the economic and financial institutions of the neocolony; thirdly, within the neocolony, political control through a figurehead bourgeoisie that inserts itself into the structures of economic penetration and exploitation, conforming to the interests of international corporations and financial institutions, and benefitting itself at the expense of the majority of people in the nation; fourthly, social control by the supposedly independent state’s military forces, with necessary training and arms coming from the USA or other powerful states; fifthly, ideological penetration of the neocolony, involving the dissemination of ideas that justify and legitimate the existing political-economic system; and finally, the use of military force directly by the USA and/or other dominant states, when popular resistance provokes political and social instability in the neocolony. When it functions, the neocolonial system gives the appearance of independence to the neocolony, and the function of ideology is to reinforce this image in order to give legitimacy to the neocolonial world order.

In the 1970s, some social scientists and historians, most notably the U.S. sociologist Immanuel Wallerstein, began to view the global network of economic and political relations as constituting a single world-system that extends beyond the boundaries of nations, societies and cultures. So when we observe the mechanisms of neocolonialism, we are discerning the transition of the world-system to a neocolonial world-system.

Wallerstein described the characteristics of the world-economy that was the economic component of the modern world-system in the colonial period, the structures of which, for the most part, are preserved in the neocolonial world-system. The world-economy consists of all the economic activities related to one another through a global geographical division of labor, with particular economic activities carried out in specific geographical regions. In the global geographical division of labor, there are three regions: the core, the historic manufacturing center; the periphery, the supplier of raw materials on a base of forced and cheap labor; and the semiperiphery, which has some core characteristics and some peripheral characteristics.

Wallerstein analyzed the evolution of the world-system through distinct stages. The modern world-system came into being during the sixteenth century, with the Spanish and Portuguese conquest of America. During the period 1492-1640, a world-economy emerged, in which the peripheral regions (Hispanic America and Eastern Europe) produced raw materials (gold, silver, grains, sugar, wood, beef, and leather), using various forms of forced labor. These peripheral regions were providing the raw materials that fueled Western European commercial expansion and economic development. It was gold and silver taken from the Americas that was the fundamental stimulus to this dynamic transcontinental integration and commercial expansion.

During the nineteenth century, the world-economy passed through a stage of rapid expansion, as a result of the conquest of Africa and much of Asia by England, France, and other European nations. From 1750 to 1850, the Indian subcontinent, the Ottoman Empire, the Russian Empire, and West Africa were incorporated into the periphery of the European world-economy, thus expanding its access to raw materials for manufacturing and to markets for manufactured goods. Subsequently, the territorial expansion of the world-system proceeded apace. From 1815 to 1914, European nations, particularly Britain and France, established colonial domination over new territories. Vast regions were peripheralized, including significant parts of Africa and South East Asia and the Middle East, so that the modern world-economy became truly global in scope.

A subsequent stage in the development of the world-system was from 1914 to 1968, when the colonized peoples emerged as important political actors, forcing a transition from colonialism to neocolonialism. The stage also was characterized by the culmination of the spectacular ascent of the USA. The stage reached its high point from 1945 to 1963, when the capitalist world-economy took shape as a neocolonial world-system under U.S. uncontested military, economic, commercial, financial, political, and ideological dominance. During the period of U.S. hegemony or dominance, the transition of the colonized regions into formally independent neocolonies was for the most part completed. The United Nations was established, in which virtually all of the nations of the world would eventually be represented as supposedly independent nations. The USA projected itself as a nation that was advanced in the protection of political and civil rights and in providing economic opportunity. As the world-system evolved into a neocolonial system, it proclaimed a liberal democratic ideology of equality among individuals and nations, political and civil rights for all, and the independence and sovereignty of all nations.

The structures of the neocolonial world-system and the aggressive U.S. imperialist policies since 1980, seeking to preserve U.S. hegemony in the neocolonial world-system, are the sources of the social evils and crises that humanity now endures. The chaos that results from these structures and policies are increasingly evident, and new forms of fascism emerging as a misguided remedy. What can save humanity is the collective transformation of the neocolonial world-system into a more just, democratic, and sustainable world-system, built on a foundation of respect for sovereignty, mutually beneficial trade, cooperation among nations, and solidarity among peoples. Such construction of a more just, democratic, and sustainable world is the duty that the popular movements of Latin America and the Third World have assumed.

This is Charles McKelvey, speaking from Cuba, the heart and soul of a global socialist revolution that struggles for that world more just, democratic, and sustainable.