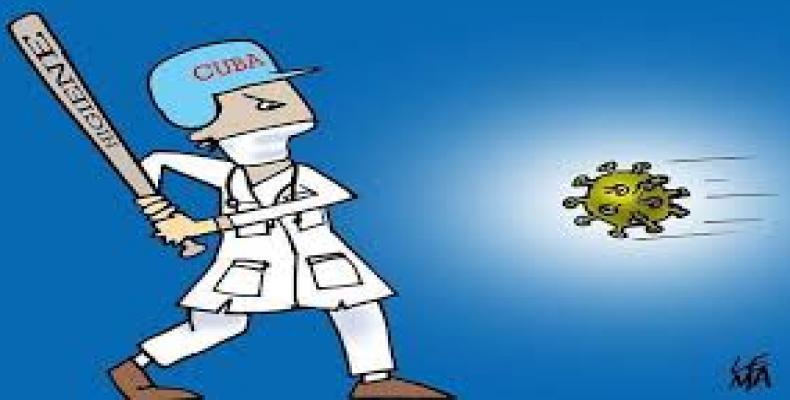 In today’s “This week in Cuba,” we review, first, the news that the Covid-19 cycle in Cuba is surpassing the most favorable projection; secondly, the call of the Cuban leadership that the people continue disciplined compliance with health measures, in order to avoid a second wave; thirdly, a Cuban research study on the level of immunity of the Cuban population; and fourthly, an editorial by a Cuban journalist asserting that the pandemic is capitalism without a mask.

The evolution of Covid-19 in Cuba during the past week has arrived to surpass the most favorable projections of the model developed by a team of specialists headed by Dr. Raúl Ginovar, Dean of the Faculty of Mathematics and Computer Sciences of the University of Havana. The most favorable curve in the model projects a 100-day rise and fall cycle for Cuba beginning on March 11 and ending on June 19, with a peak of 1000 active cases at fifty days, on April 30. An active case is defined as a confirmed positive case currently hospitalized. In Cuba, all identified confirmed cases are hospitalized for observation and care, whether or not they have symptoms. They are discharged when the have continually tested negative for a period of fifteen days.

The degree to which the results are favorable depends upon two factors: first, the extent to which the people comply with the measures of hygiene, social distancing, and social isolation; and secondly, the effectiveness of treatment procedures for hospitalized sick persons. The most favorable curve for Cuba projects a cycle considerably better that what occurs internationally, where the peak is reached on average at 77 days. The model takes into account Cuban conditions: a coherent, scientifically informed national plan; and the capacity to implement effective treatment measures.

Another indication of the when the cycle has reached its peak is the number of newly confirmed cases each day. In the period of April 6 to April 27, the Cuban cycle reached a plateau, with the number of new cases fluctuating from 46 to 63. Since April 28, the number of daily new cases has been falling, ranging from 12 to 38, with the exception of 74 on May 1, the day of the Cotorro event.

However, using daily new cases rather than active hospitalized cases takes away the factor of the effectiveness of Cuban medical treatments of sick persons; it focuses only on the extent to which the contagion spreads. By this measure, the results in Cuba are approaching the medium curve, rather than the favorable, as a result of the indiscipline of some persons with respect to the health measure. As of May 7, Cuba has accumulated 1741 cases, more than the 1500 cases initially projected by the most favorable curve by the end of the cycle. The medium curve projected 2000 confirmed cases by the end of the cycle; and the highest, most unfavorable curve projected 2400 cases by the end of the cycle.

The indiscipline of some with respect to the health measures is a theme of much discussion in Cuba. The government, working in cooperation with a team of scientists and doctors, had formulated a coherent and scientifically informed national plan even before the virus had arrived to the island. As the plan evolved, it included the closing of schools, the cancellation of public events, diagnostic texts, isolation of confirmed and suspected cases, the suspension of public transportation and international travel, and the restriction of movement from one province to another. But the effectiveness of the plan depends on the compliance of the people. The great majority have complied, but there is a minority that ignores the health rules, apparently not convinced of the risk to themselves and others, which has provoked appeals from the leadership was well as threats of fines and even imprisonment. The indiscipline of some has resulted in local transmission events that push upward the total accumulated number of confirmed cases. One event, for example, was provoked by a party for a family member who had returned from abroad; another was provoked by a religious celebration attended by a number of people.

Referring to the indiscipline of some persons, Cuba President Miguel Díaz-Canel asserted that “we cannot permit a group of irresponsible persons to cause problems for the majority. We all have to subordinate ourselves to the interests of the majority, which are the interests of the nation and of each province and municipality; which above all is an interest in saving lives and preventing the propagation of the contagion.”

During this past week, the Minister of Public Health, José Ángel Portal Miranda, was asked if the people are complying with the health measures. He responded, “The answer is yes, but there are many persons who are not aware of the gravity of the disease and its easy propagation. Still we see individuals in the street who are not doing anything essential, who are not using the face mask correctly, smoking in the streets, and organizing parties in their houses.”

Focusing on the fall in active cases earlier than what was projected in the most favorable scenario, the President, Prime Minister, Minister of Health, National Director of Epidemiology, news announcers and commentators, and prominent personalities in a variety of fields are affirming that the nations is winning the battle against Covid-19, as a result of the unique Cuban medical treatment, using Cuban created drugs and with procedures implemented by teams of doctors in constant communication with researchers; and as a result of a coherent, scientifically informed plan, devised by the leadership in cooperation with scientists, for the most part complied with by the people. However, there is concern among the leadership that the people will become overconfident and will begin departing from compliance with the health measures, leaving home for unnecessary reasons, interacting without adequate protections and precautions, thereby provoking a new rise in the number of confirmed cases. On Thursday, May 7, President Miguel Díaz-Canel asserted that “now that we are winning this fight, we cannot place at risk what we have achieved.” The Minister of Public Health, José Ángel Portal Miranda, observed on the May 5 evening television/radio news program La Mesa Redonda that “we are not free of danger. Although the tendency is descent in the number of cases, Cuba could go back, and arrive to a critical situation. If we cease complying with the measures, we will increase the number of the sick and seriously ill.” We must continue with social isolation and extreme measures of hygiene, he declared. We cannot lower the guard.

In accordance with the concern of the leadership that the people will become overconfident as a result of the success of the measures, and will relax their compliance with the health measures, a story appeared in the Cuban daily newspaper Granma on Thursday, May 7, which reported on the Japanese Island of Kokkaido. The territory had been recognized as a symbol of successful containment of Covid-19, as a result of its quick response to the initial outbreak. But the local authorities lifted the restrictions, as a result of pressure from local businesses, who wanted to reactivate the economy; and because of a false feeling of security due to the declining rate of infection. However, the restrictions were lifted too soon, giving rise to a second wave of infections and deaths. The lesson for Cuba is that, in spite of the beginning of a decline in active cases and new confirmed cases, compliance with the health measures and discipline must continue.

The Cuban Ministry of Public Health has initiated a study of the presence of antibodies and the prevalence of Covid-19 in Cuba, in accordance with the recommendations of the World Organization of Health. The study seeks to obtain precise information concerning the state of immunology of the population and to identify the most important factors of risk for those that have been infected with the SARS-CoV-2 virus. The study will be based on a representative sample of the Cuban population, which will be examined periodically for at least two months. Approximately 4000 citizens proceeding from 260 health areas of the country have been randomly selected for the study. There are few studies with this conceptualization in the world.

(4) The pandemic is capitalism without mask

In an editorial in the Thursday, May 7, edition of the Granma, entitled “Pandemic: Capitalism without a mask,” Manuel Valdés Cruz writes: “In the 1980s, they sold us neoliberalism as the best for the world. However, forty years later, misery has intensified. . . . Neoliberalism has put the world in a dead-end street; neoliberalism, and its passion for the market, has carried millions of human beings to ruin and death. History will judge those responsible.

“Let us globalize solidarity among the peoples; let us banish from the world the egoism that is the natural offshoot of a capitalist system that considers human beings as mere merchandise.”