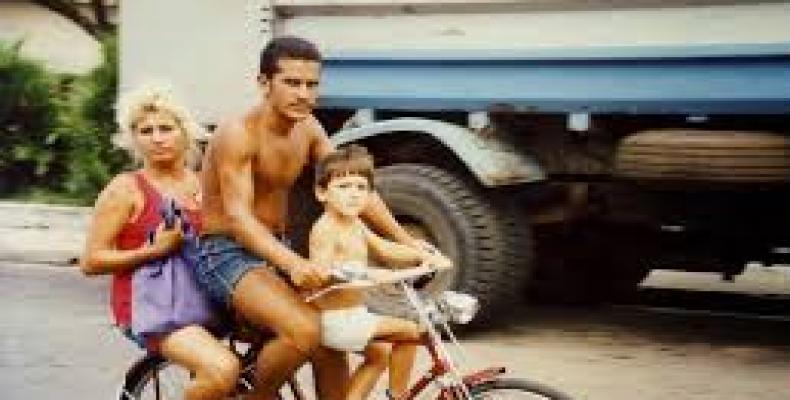 The collapse of the Soviet Union and the socialist bloc meant for Cuba the disappearance of its trading partners, placing in doubt the significant gains of the Cuban revolutionary project. Compounding the difficult situation, the U.S. blockade was maintained and strengthened, and Cuba was without access to credits and loans through international finance agencies. In three years, the Gross Domestic Product was reduced by 23%, due principally to the impossibility of importing capital goods and raw materials. The purchasing capacity of the country was reduced from 8 billion dollars to 1.7 billion dollars. The supply of petroleum declined from 13.4 million tons to 3.3 million tons, while national production of petroleum fell 17.8%. As a result, electric energy was reduced to 70% of its 1989 level, and steel production was at 19% of its 1989 level. The sugar cane harvest declined from 7 to 4.3 million tons, and agricultural production and animal husbandry declined by 53%. Consumption declined dramatically, and the people began to live under conditions of extreme scarcity. A good part of the day was spent without electricity. The system of public transportation was drastically reduced, and many people walked or rode bicycles.

However, because of widespread popular support for the revolutionary project, due to its evident and persistent defense of the rights and needs of the people and the sovereignty of the nation, Cuba had entered an economic crisis, but not a political crisis. The revolutionary leadership asked the people to sacrifice in defense of their Revolution, and in the great majority, they did.

The specific policies of the Cuban adjustment were comprehensive. Cuba sought to expand investments in certain high value-added sectors of the world-economy that Cuba was capable of developing: tourism, the pharmaceutical industry and biotechnology, petroleum, and nickel. These sectors were expanded through investment by both foreign and Cuban state capital, except for the pharmaceutical industry and biotechnology, which was financed entirely by the Cuban state. New possibilities were established for direct foreign investment, but under conditions of strong regulation by the Cuban government, fundamentally distinct from the privatization of companies and the opening to foreign capital that was occurring throughout the world with the imposition of the neoliberal project. Most agreements with foreign hotel companies, for example, were joint ventures, with terms that protected Cuban interests. The Cuban opening to foreign capital was similar to the openings in China and Vietnam: the identification by the state of areas where foreign capital was needed, in accordance with the goals and rules of the national development plan.

Secondly, the policies of the “Special Period” included decentralization of government-owned enterprises, with many enterprises becoming fully or partially self-financing in accordance with the marketability of the particular goods or services. Thirdly, possibilities for self-employment, which had existed since the beginning of the Revolution, were expanded significantly. Fourthly, in order to attract foreign currency, the possession and trading of foreign currencies by Cubans were legalized. A dual economy was created: one based on “national money,” and another on “Cuban Convertible Pesos” (CUC). Foreign currencies entered the country through foreign companies and family remittances. Fifth, when a center of production was closed, the state continued to pay 70% of the salaries of the workers who lost employment, until they could be placed in new employment. Sixth, there was rationing of electricity and gasoline.

These policies enabled the country to emerge from the depths of the crisis in 1993 to a level of recovery by 2001. Beginning in 1995, there was a steady growth in the gross domestic product. The recovery largely was based in growth in tourism, biotechnology, mining, and petroleum.

Investments in the biopharmaceutical industry continued during the Special Period, with the intention of developing high-technology exports. The Center for Immune Biology and the Finley Institute were founded in 1991, and the National Center for Biopreparation was established in 1992. Cuban scientific research centers have developed more than fifty products and services that have received international patents, including a Hepatitis B vaccine and the Interferon Alfa-2B compound that is today used internationally in the treatment of COVID-19.

Joint ventures in the nickel industry brought its production to a record level by 2001. Cuba is the world’s sixth largest producer of nickel. At the same time, petroleum production increased six-fold from 1991 to 2001, and Cuba now produces enough petroleum to be self-sufficient in the generation of electricity.

As the dynamics of recovery unfolded, Cuba maintained its commitment to the education and health needs of the people, and it has been able to preserve the system of health and education developed prior to 1989. The Cuban scholar Jesus Arboleya maintains that the crisis of the Special Period unfolded in a form very different from economic crises in capitalist economies. “There were great shortages, but not starvation; unemployment, but not alienation; there were tensions, but not uprisings, much less generalized repression, as would have been normal in the rest of the world. In the worst moments, the health system was maintained and the schools continued functioning with used books, paper, and pencils.” Arboleya further observes, “Few imagined [in 1994] that Cuba would be capable of overcoming this crisis. Even a good part of the international Left predicted the anticipated internment of the Cuban Revolution. . . . The overcoming of the crisis to the present level constitutes a fact explainable only on the basis of the cohesion created by the Revolution and the virtues of the socialist distributive system.”

The Cuban Revolution would persist, and it would become a principal actor in the process of Latin American union and integration, the renewal of the Non-Aligned Movement, and the proclamation of Socialism for the Twenty-First Century.