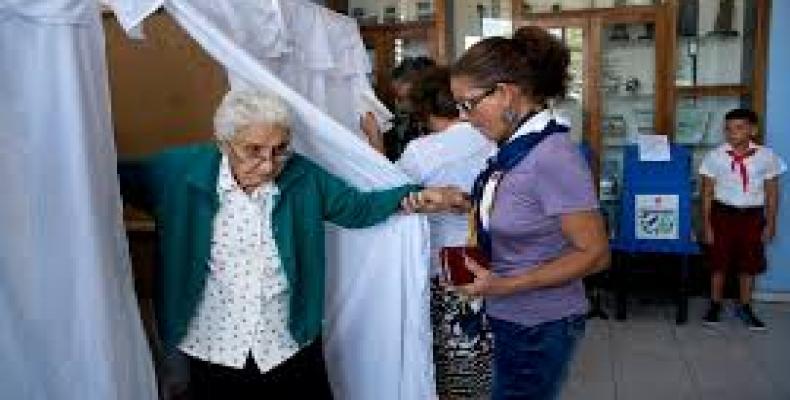 Following the triumph of the Revolution on January 1, 1959, Fidel and the people moved toward the creation of an alternative form of democracy. There was a constant dialogue between Fidel and the people. He regularly met with the people, listening to their concerns. At the same time, his speeches were interactive, somewhat like the call and response tradition of black churches in the United States. Che once said, when he listens to Fidel speak, it is hard to tell if it is Fidel speaking, or the people speaking through him.

Peasant organizations were a logical outgrowth of the 1959 Agrarian Reform Law, and they were organized separately as small-scale proprietors and cooperativists. On the state-managed farms, the workers organizations, represented by their elected leaders, jointly manage the farms with state-appointed managers and technicians.

Student organizations also predated the Revolution, and also had their moments of accommodation to the neocolonial order. Following the triumph of the Revolution, they were directed by revolutionary students, with the support of the majority.

The Federation of Cuban Women was founded in 1960 by Fidel Castro and Wilma Espín. It was a logical culmination of the increasingly equal role that women had been playing in the revolutionary struggle, including the formation of women’s combat units in the guerrilla struggle in the mountains.

The neighborhood organizations, the Committees for the Defense of the Revolution, were established by Fidel in 1960 as a vigilance or neighborhood watch organization. They were developed to defend the people against the terrorist actions carried out by U.S.-supported counterrevolutionary organizations in Miami. Over the years they have carried out various service activities, such as blood donations and the recent support of medical students in the door-to-door inquiries in the battle against Covid-19.

From the beginning, the mass organizations enabled high levels of citizen participation in the revolutionary process. They have been excellent structures of the formation of leaders among the people. By their nature, they include the possibility for the expression of opinions, and they therefore functioned not only to carry out revolutionary tasks, but also to provide a structure through which the revolutionary leadership could become aware of the opinions and inquietudes of the people.

Mass assemblies also were held, in which large numbers of people traveled to the capital city in order to affirm support for declarations of fundamental principles emitted by the revolutionary government. The First and Second Declarations of Havana in 1960 constituted the first steps toward the development of an alternative constitutional order.

The Constitution of 1976 institutionalized the alternative form of democracy that the Revolution had developed. Its established structures of People’s Power, integrated with the mass organizations.

People’s Power exists on a foundation of direct elections by the people in 12,515 small voting districts of 1000 to 1500 voters, who elect delegates to the 169 municipal assembles of the nation. The voters select one of two or more candidates on the ballot, in secret voting, with all citizens 16 years of age or older automatically registered. The candidates on the ballot emerge from a series of nomination assemblies in each voting district, in which the neighbors put forth possible names of candidates. There can be a discussion of the strengths and capacities of each person put forth, never criticism of them. Usually the comments focus on the contribution of the proposed person to the community or the nation. People indicate support of one of the persons put forward, with a show of hands. Following the nomination assemblies, the voting district’s electoral commission, composed of representatives of the mass organizations, select two or three candidates (no more than six) to be placed on the ballot.

In preparation for the elections to the 169 municipal assemblies, brief one-page biographies and a photo are placed in prominent places in the voting district. There is no campaign, and the candidates do not make campaign promises. All are elected or not on the basis of the voters’ sense of their service to the community and the nation.

The Constitution of 1976 established the Communist Party of Cuba as the guiding force of the nation. Its function is to educate and lead. But it cannot decide. The National Assembly, based upon the recommendations of the President, decides with respect to laws, measures, and actions. The Party is a vanguard political party, composed of fifteen percent of the people, which recommends the future direction of the nation. The party guides, but the government decides.

Thus, Cuba’s people’s democracy has three pillars: mass organizations, composed of the great majority of the people; people’s power, which consists of delegates and deputies elected directly and indirectly by the people; and the Communist Party, a moral and educational force that guides but does not decide. It is a system that works well. State policies in with respect to the economy, foreign policy, health, education, and science are made without internal conflict and on the basis of consensus, and they are accepted as legitimate by the great majority of the people. There is a broad societal consensus shared by political leaders, journalists, educators, intellectuals, scientists, artists, and the leaders of the mass organizations.

In the Cuban quest for sovereignty, the nation had to break with structures that had been imposed during the neocolonial republic by the United States, including the political system of representative democracy, which was adapted to the Cuban dependent capitalist economy, and which had functioned to promote the interests of the elite and foreign capital. The Cuban Revolution has developed an alternative political process, adapted to Cuban conditions, and designed to ensure that political power is in the hand of the delegates and deputies of the people.

People’s democracy is the most significant achievement of the Cuban Revolution. It should be better known to the world.