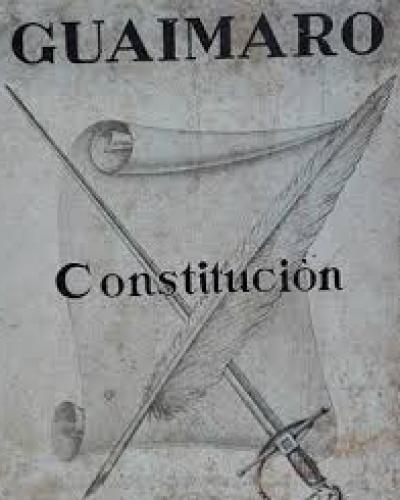 Since the democratic revolutions of the late eighteenth century, the Western tendency has been to formulate constitutions, establishing a foundation for laws passed by the legislative branch of government, the actions of the executive, and the interpretations of the judicial branch. In the case of Cuba, there have been several constitutions that relate to the unfolding revolutionary process.

The Cuban Revolution was initiated on October 10, 1868, when Carlos Manuel de Céspedes, a landholder and slaveholder, declared the independence of Cuba and the freedom of his slaves. The constitutional foundation for the Republic of Cuba in Arms was established on April 10, 1869, when seventeen deputies signed the Constitution of Guáimaro, a town in liberated territory. It was nullified by the Pact of Zanjón of 1878, which ended the war without the attainment of the revolution’s goals of independence and the abolition of slavery.

The Constitution of 1901 established the Republic of Cuba following the third war of independence of 1895 to 1898. Written during the U.S. military occupation that followed the 1898 military intervention and in the aftermath of the elimination of Cuban revolutionary political and military institutions, the Constitution of 1901 copied the governmental structures of the U.S. constitution. It did not reflect the conditions of Cuba as a new state recently liberated from Spanish colonialism. It said nothing with respect to the protection of social and economic rights of citizens, the role of the state in the economy, or limitations on large estates and foreign capital. It was a constitution that that set aside the vision of Martí and that provided the foundation for the U.S.-dominated neocolonial republic.

At the end of the 1930s, the changing national and international situation led the Batista dictatorship to a democratic opening, which included the convoking of a constitutional assembly, a long-standing demand of the popular movement. Elections for the Constitutional Assembly were held on November 15, 1939, resulting in the election of seventy-six delegates from seven political parties, including six delegates from the Communist Party as well as other socialist and progressive delegates. Influenced by the Mexican Constitution of 1917 and the prevailing social and progressive ideals of the epoch, the Constitution of 1940 was advanced for its time. However, key aspects of the Constitution were not implemented with the necessary laws during the period 1940 to 1952, in spite of the fact that the presidents and legislators were elected by the people, in accordance with the standard structures of representative democracy. Following the Batista coup d’état of March 10, 1952 that launched the second Batista dictatorship, the Constitution of 1940 was replaced with Statutes of dubious juridical base.

In Fidel’s October 16, 1953, self-defense before the court, Fidel declared that, if the Moncada garrison had been successfully taken, five revolutionary laws would have been immediately broadcast by radio. The first was the re-establishment of the Constitution of 1940, with the executive, legislative, and judicial functions assumed by the revolutionary government, in order that the government would be able to implement the popular will and true justice, until these governmental structures, presently distorted by dictatorship and corruption, can be restored legitimately. Following the triumph of the Revolution on January 1, 1959, the Constitution of 1940 was reestablished, with necessary modifications for the exercise of power, set forth in what was called the Fundamental Law, approved by the provisional revolutionary government on February 7, 1959.

The Constitution of 1976 established a political process that has certain characteristics distinct from many representative democracies. These alternative structures prevent problems that commonly occur in representative democracies, such as the indirect control of the state by the elite, political gridlock, and confusion and division among the people. In the first place, the Constitution of 1976 abolishes electoral political parties. Candidates for the municipal assemblies are nominated by the people in a serious of nomination assemblies in neighborhoods, without the participation of political parties. Secondly, the Constitution of 1976 established the unity of power. It establishes a functional division among the legislative, executive, and judicial powers, but not a balance of powers. Accordingly, the National Assembly of People’s Power is the highest authority of the nation; it enacts laws and designates the highest members of the executive and judicial branches. Thirdly, the Constitution of 1976 defines the Communist Party of Cuba as the vanguard party that is leading force in the society. The Party leads through education and by example, providing a foundation for consensus; but the authority to decide is in the hands of the National Assembly of People’s Power. These alternative structures established by the Cuban Constitution create conditions for a sustained debate that seeks consensus.

In addition, the Constitution of 1976, like the 1960 Declaration of Havana, affirms the right of Cuba to sovereignty as well as the social and economic rights of all citizens, including rights to employment, food, health, education, culture, and recreation.

In 2019, because of changes in Cuban society since 1976, Cuba developed a new constitution, which we will discuss in the next episode of Imperialism and Revolution.