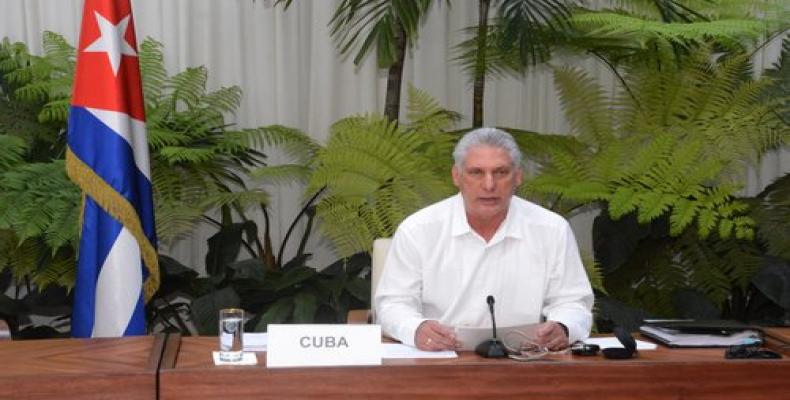 In today’s “This week in Cuba,” we review, first, the announcement by the Cuban government of the plans for the stage of recuperation from Covid-19; and secondly, the speech by Cuban President Miguel Díaz-Canel at the high-level virtual conference of ALBA-TCP on the Post-Pandemic Economy.

On the June 11 daily evening television/radio news program La Mesa Redonda, Cuba President Miguel Díaz-Canel, Prime Minister Manuel Marrero, and Minister of the Economy Alejandro Gil explained the features of the Cuba plan for recuperation. Díaz-Canel noted that the plan will have two stages, a first stage of a gradual return to normality in productive, economic, and social activities, with care taken in order to not provoke an endemic; and a second stage of economic recuperation. The first stage will have three phases, with movement from one phase to another to be determined by pre-established health indicators. The designation of phases will vary from province to province, inasmuch as there is variation in the rates of infection by province. In the last fifteen days, thirteen of the fifteen provinces and the Isle of Youth have not had a single confirmed case; in contrast, cases are concentrated in the Province of the City of Havana. The thirteen provinces and the Isle of Youth are ready to go to the first stage, and some may quickly go to the second. The President indicated that it has not yet been decided when the first phase will begin, but he expects that it will be sometime around the end of this upcoming week or the beginning of the following. The restrictive measures, he noted, will be reestablished if there is a new breakout or incident.

The Plan of Recuperation, like the Plan of Prevention and Control that has guided the country since March, was formulated by a temporary team composed of government ministers and scientists and researchers in a wide variety of fields, particularly the medical sciences. The team is led by the President and Prime Minister. In the Cuban political process, the Council of Ministers, headed by the President and Prime Minister, is the executive branch of government. It is elected by the National Assembly of People’s Power, to which it must render accounts. The National Assembly is the legislative branch; its deputies are elected by the delegates of the municipal assemblies of the nation, who have been elected by the people in voting districts throughout the country. The Constitution gives to the Communist Party of Cuba the authority to guide the revolution and to educate the people, and in this capacity, it can make recommendations to the National Assembly or the Council of Ministers. In the case of the Constitution of 2019, for example, the Party took the initiative in formulating the initial draft and directing a popular consultation, before presenting it to the National Assembly. In the case of the plans for combatting Covid-19, the government, headed by the President and the Prime Minister, has taken the initiative of forming an advisory team of scientists and researchers. The government is not constitutionally required to submit any action to the Party. However, when Díaz-Canel assumed the presidency in 2018, he promised the people that all decisions of importance would be submitted to the Party and to its General Secretary, Raúl Castro, a declaration that was greeted with sustained applause by the deputies of the National Assembly. Therefore, at the June 11 Mesa Redonda, Díaz-Canel informed the people that the team had met with the Party, and that recovery plan had been approved by the Party on the previous day.

Díaz-Canel observed that there are a number of indicators suggesting that the pandemic is under control, including the decline in the number of newly confirmed cases and active cases as well as a reduction in the number of patients that are in critical or serious condition. There have been only two deaths, he noted, during the last two weeks. The number of active cases, he said, has risen over the last two weeks, but these cases are a consequence of three break-out events to which the great majority of newly confirmed cases can be traced. For this reason, the nation can and ought to proceed, with caution and discipline. A 112-page document has been prepared, to assist the people in understanding the measures to be taken during the recovery stage.

Many of the details of the plan were explained by Prime Minister Marrero. In the first stage of recovery, an effort will be made, not to return to normal, but to return to a “new normal,” in which careful attention is given to avoiding a new breakout. During the first stage, the hygiene measures will be maintained and strictly enforced: cloth face masks when leaving the home, no great concentrations of people, physical distancing, and regular hand washing. These measures will continue in the second phase, but with greater flexibility. Face masks, for example, will be required for public activities, in closed places, and where there is a high concentration of persons; but face masks will not be required outside the home when these conditions do not apply.

The active inquiries in neighborhoods, which have enabled the early identification, observation, and treatment of pre-symptomatic persons, will continue and will expand. Measures not permitting the entrance of a person with respiratory symptoms in work centers will be kept in place during the three phases of the recovery stage.

Stores and restaurants will be open during the first phase, but under physical distancing and health measures. Self-employed workers can return to their trades and businesses, with health regulations.

Schools will finish the second semester of this past academic year in September, and the new academic year will begin in November. The ministries of education and higher education will be providing more information.

The parks, lodging, and gastronomical services of national tourism will be open for the summer. All beaches will be open for the summer, under strictly enforced physical distancing rules. Zoos, botanical gardens, and aquariums will be open during the first phase, with 50% capacity. The games of the national baseball league will begin during the second phase; the stadiums will be open to the public, but with health regulations, including face masks and physical distancing. In the second phase, houses of culture, theaters, and cinemas will be open. All traditional carnivals will remain closed. No large parties or concentrations of people will be permitted.

International tourism will return in the second phase, but in a very limited form. It will apply only to the keys. The tourists will enter the country only in the airports in the keys, and all will be tested upon arrival. During their visit, they will be able to tour among the keys, but they cannot enter the island. A medical team of a doctor, nurse, and medical worker will be present in each hotel.

During the third phase, international tourism will be extended to the island. The hotels will not have 100% occupancy. They will have fifty or sixty percent occupancy, depending on the conditions of the hotel, in order to maintain physical distancing among the guests.

Minister of the Economy Alejandro Gil observed that in many countries there is great debate concerning whether priority should be given to health or the economy. In Cuba, he declared, there is no such debate. For Cuba, it is clear that health is the priority. The fundamental task has been to save lives. But in the long run, he observed, giving priority to health is better for the economy, because with the disease contained, the nation will be in a position to advance to the stage of the recuperation of the economy.

On June 10, Cuban President Miguel Díaz-Canel addressed the high-level virtual conference on the Post-pandemic Economy of ALBA-TCP (Bolivarian Alliance for the Peoples of our America-Commercial Treaty of the Peoples). The Conference was convoked by Nicolás Maduro, President of Venezuela, who called for an alliance with the World Health Organization and with nations like China and Russia, in order to ensure that, when a Covid-19 vaccine is developed, there will be access and distribution for the peoples. Also participating were Daniel Ortega, President of Nicaragua; Ralph Gonsalves, Prime Minister of Saint Vincent and the Grenadines; the prime ministers of Antigua and Barbuda and Dominica; the foreign ministers of Granada and Surinam; and representatives of other states of the alliance.

ALBA was established in 2004 by Hugo Chávez and Fidel Castro as a project of Latin American integration based on mutually beneficial trade and on cultural as well as commercial relations among the nations. It was conceived as an alternative to the U.S. imposed project of American integration, FTAA, which was intended as a reinforcement and deepening of U.S. economic and financial penetration of Latin America and the Caribbean, in accordance with U.S. imperialist interest and intentions.

ALBA has suffered setbacks backs in recent years as a result of the fall of socialist governments that had been key members of the alliance. Ecuador fell to a Trojan Horse strategy, when current head of state Lenin Moreno took the country in a neoliberal direction, without previously announcing his intention to do so, following the presidential administrations of Rafael Correa. In Bolivia, a violent coup d’état forced the resignation of Evo Morales, who spoke at the virtual conference as a special invited guest.

In his address to the virtual conference, Cuban President Miguel Díez-Canel noted that the multidimensional global crisis caused by the Covid-19 unfolds in the context of an unjust international order, and it especially impacts the underdeveloped world. The difficulties that the world today confronts are “an expression of the egoism and injustice of the economic models of a system who sole purpose is to enrich a minority at the cost of the suffering of the majority.” He further declared, “Incredibly, the overdeveloped world, which robs brains and dazzles with the shining of sophisticated productions, has shown itself incapable to employing its enormous resources in the construction of a global front against a pandemic that can only be confronted with two forces that are within the reach of everyone: cooperation and solidarity.” He noted that today the world is paying the price for the neoliberal reduction of state budgets destined for health care and scientific investigation. He declared that “the moment and common sense impose on the international community the duty to leave aside political differences and to search for common solutions by means of international cooperation and necessary solidarity.” Cuba is available, he stated, to participate in video conferences to share what it has learned in its battle against the pandemic, in the areas of prevention, treatment, and scientific investigation.