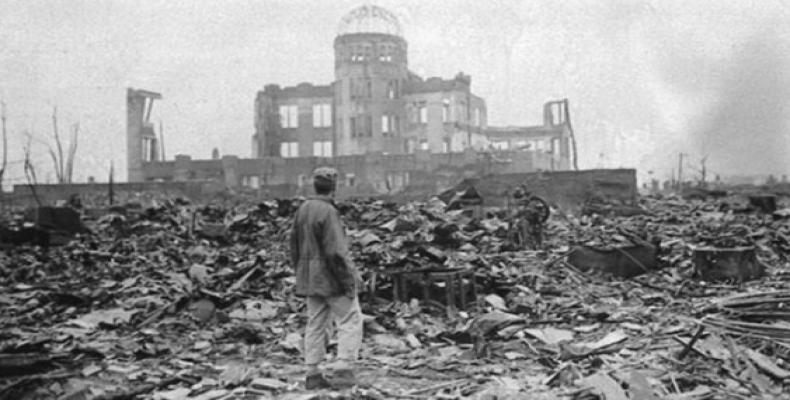 On August 9, 1945, the government of the United States, then headed by President Harry S. Truman, dropped a plutonium atomic bomb over Nagasaki, which instantly killed no less than 70,000 men, women and children and condemned to death tens of thousands more over the subsequent years.

It was a crime against humanity that was absolutely unnecessary since only three days earlier the city of Hiroshima had been erased from the map by another atomic bomb, this time made up of uranium. This atomic device burned to ashes over 140,000 people in a matter of seconds.

After the first atomic attack, the nuclear destruction capability of the United States had been more than clearly established and by then Japan had no other alternative than surrendering.  After Hiroshima, dropping a new atomic bomb over Japan made no sense at all.

The military and civilian leadership of the United States already had in their hands all the data about the incredible destructive power of the atomic devices they had developed over a number of years.

The selection of the Japanese targets was quite difficult because they were cities of no major importance from a military standpoint and they had no large concentrations of troops.  They were, plain and simple, civilian targets.

The bombing of Nagasaki on August 9, 1945 followed the atomic bomb attack on Hiroshima three days earlier, on August 6.  U.S. President Harry S. Truman, a populist leader from the Democratic Party, ignored the suggestions of his military advisers, who said that he should send a telegram to Japan and ask that they watch as Washington obliterates an uninhabited island in the Pacific.  Truman decided to use a weapon of mass destruction, not once but twice... hitting two civilian targets -- and have fun watching Japanese victims, as guinea pigs, deal with the horrible effects of nuclear warfare.

It was a strictly punitive operation, just as the bombing of the German city of Dresden in February 1945, an historic site without any major strategic value which was totally destroyed.

This crime, committed by the U.S. and UK Air Forces, killed nearly 250,000 civilians, despite the fact that the Nazi Army was already virtually defeated.  The intellectual and material authors of the carnage in Dresden, Hiroshima and Nagasaki were never taken to trial after the war ended.

Those responsible for the tragedies in Hiroshima and Nagasaki were able to escape from Justice, but we must not let them escape from the world's memory.

With the unpredictable Donald Trump in the White House, humankind is living difficult times and fear spreads that the demons could rain death again from the skies.

These fears are fed by the decision of Washington to abandon the  leave the Intermediate Range Nuclear Limitation Treaty, although the White House is doing everything possible to blame the Russians.

We must not let the world forget that the United States is the only nation on planet Earth to have used nuclear weapons against unarmed civilians.  And given the unpredictability of the current U.S. administration, the risk of repetition of this crime is very high.