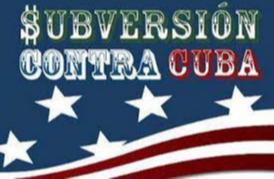 Since the triumph of the Revolution in 1959, Cuba has been fighting a systematic battle for the truth and against lies, because its enemies, headed by the U.S. government, have always manipulated the Cuban reality in their efforts to regain their historical domination over the Caribbean island.

I read in the Ecuadorian press in April 1961, when I was on a diplomatic mission in Quito, that the famous invaders of Column 2506, highly promoted by the Yankee press, had taken the "port" of Bayamo and that some leaders of the Revolution had taken refuge in several embassy headquarters accredited in Havana.

These were crude lies, but not everyone in the world knew that Bayamo, the current capital of the eastern province of Granma, and the cradle of Cuban nationality because the first cry for Cuban independence was made there, is far from the sea and is obviously not a port city.

Lies in bulk were spread to the world from radio stations financed by the CIA, the Yankee Intelligence Agency, especially Radio Swan, La Voz de los Estados Unidos and Radio Martí, and later by television, which also offended Cuba by using the name of the Apostle of Cuban Independence.

One lie after another as part of the war against the Cuban Revolution, and now Washington is using new technologies and especially the so-called social networks for its perverse aggression against Cuba, as demonstrated last July 11, when thousands of messages sent by robots were broadcast from the city of Miami to encourage protests in Cuban cities.

For this reason and with good reason the outstanding Cuban poet and troubadour Silvio Rodriguez, whose recent and very successful recitals in Spain were ignored by the Yankee press, denounces the manipulation of his words for a television documentary recorded five years ago by the enemies of the Revolution, who are organizing new acts of provocation against Cuba.

The statements taken out of context by Silvio Rodriguez are contained in a documentary entitled "Hoy es la víspera de siempre" (Today is the eve of always), filmed on the occasion of the Cuban singer-songwriter's 70th birthday.

"What a baseness and lack of decency", Silvio wrote in his blog Segunda Cita, after learning that a fragment of his statements is being used to mobilize Cuban youth to take to the streets to protest next November 15 against the "Cuban dictatorship".

The enemies of Cuba have no scruples. They are obsessed with liquidating the Cuban Revolution.  But by relying on lies and manipulation of the truth, they pave the way for its thunderous failure.