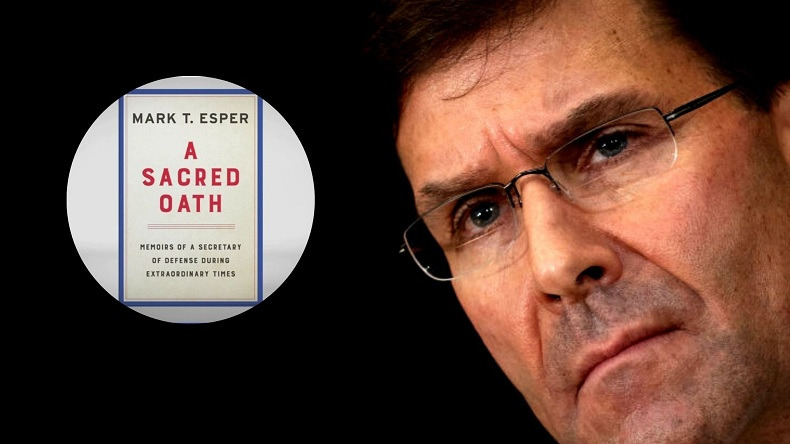 Viewers of the show woven in the United States around the forthcoming book by a subordinate of Donald Trump, wonder if the author, Mark Esper, is, as he claims, concerned about democracy in his country or simply trying to sell more copies.

"A Sacred Oath" is the title of the text by the former US Secretary of State, fired by former President Donald Trump, on whom he now seems to take revenge by divulging his dirty laundry.

Among the pearls that, according to Esper, the real estate magnate proposed from power is the launching of missiles into Mexico to destroy what he described as drug laboratories and annihilate the cartels.

The compendium of memoirs recounts Trump's excesses and mistakes, whom Esper describes as "an unprincipled person who, because of his selfishness, should not occupy a position of public service".

In his autobiography, Esper alludes to Trump's delirium for reelection, to which he associated all his decisions.

About that process, the then Secretary of Defense alleges that he was concerned about speculation that the President might misuse the military on Election Day by ordering the military to seize the ballot boxes.

Also, according to the author, the President would have tried to place 10,000 soldiers in Washington on June 1, 2020, after the large racial protests against police brutality, following the murder of George Floyd.

The writer claims to consider that Trump's actions provoked the riots in the Capitol in January last year, something of dominance in sectors of the international public opinion.

In addition to the above imputations, Esper attributed to Trump weighing an aggression against Venezuela and a naval blockade of Cuba and portrayed him as a prisoner of anger, impulse and appetite.

But the writer does not look like a candid subordinate because he took two years to formulate his precisions and agreed with Trump's order to assassinate Iranian General Qassem Suleimani.

As former advisors John Bolton and Stephanie Grisham did before, Mark Esper launched into the publication of the former dignitary's unreasons to win cordialities.

Many Americans are wondering whether a ruler of the caliber that his former collaborators have endorsed him will be able to return to the White House, from where he would further divide the country.