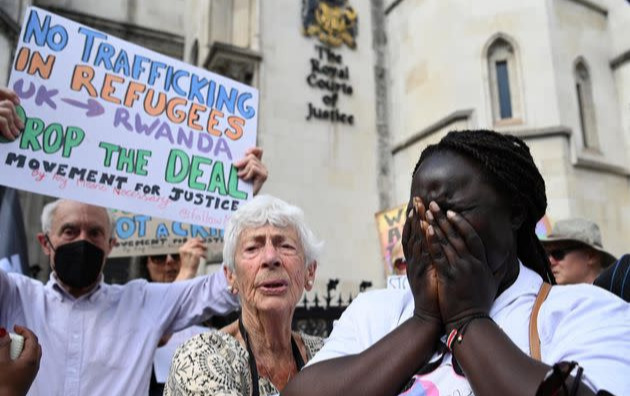 When last April the Prime Minister of the United Kingdom, Boris Johnson, announced the project to deport undocumented asylum seekers to Rwanda, I stated that it was a xenophobic delirium, a creation of perverse minds that know no limits.

When last April the Prime Minister of the United Kingdom, Boris Johnson, announced the project to deport undocumented asylum seekers to Rwanda, I stated that it was a xenophobic delirium, a creation of perverse minds that know no limits.

What then seemed a nightmare, is now a shameful reality endorsed by the British courts, which one after another rejected the appeals made by organizations defending migrants, who cross the English Channel in search of a better life by the thousands every year.

Johnson's government closed the deal with the Rwandan authorities as if it were an ordinary sale and purchase of human flesh. After the arrival of the first flight to the African country, scheduled for today, but stopped at the last moment by the European justice, they will receive 120 million pounds sterling.

This interruption, however, does not mean at all the end of the program that already has, as I said before, the approval of the main British justice bodies and is signed with Rwanda, a nation with a dubious track record in terms of human rights protection.

Perhaps the most indecent part of the case is that the one who closed the deal was the British Home Secretary, Pritti Patel, whose memory seems to have been erased by the position, assumed in 2019, since she herself is the daughter of two humble citizens originally from Gujarat, in India.

Had her parents been treated as she proposes to treat others, she would have been born in Kigali, the Rwandan capital, not in London.

In my commentary of April 16 of this year, I quoted statements by Tim Naor Hilton, CEO of Refugee Action, regarding this policy, who said that the plan is a cowardly, barbaric and inhumane way to treat people fleeing war and other evils.

The unfortunate occurrence of Johnson and his Home Secretary is nothing more than a way of washing their hands, with rather dirty water, by the way, by sending asylum seekers seven thousand kilometers away from London.

But it is being done by the same government that claimed to be willing to take in those fleeing the war in Eastern Europe, refugees from Ukraine who, of course, are blond-haired and blue-eyed.

It did not worry the head of the British government that 23 bishops, who occupy an equal number of seats in the House of Lords, have expressed that the deportation of undocumented immigrants to Rwanda shames the whole nation.

Anything can be expected from Johnson, the more bad, the more likely, and as for Mrs. Patel, she only demonstrates the wisdom of the popular saying that "there is no worse wedge than the one from the same tree".