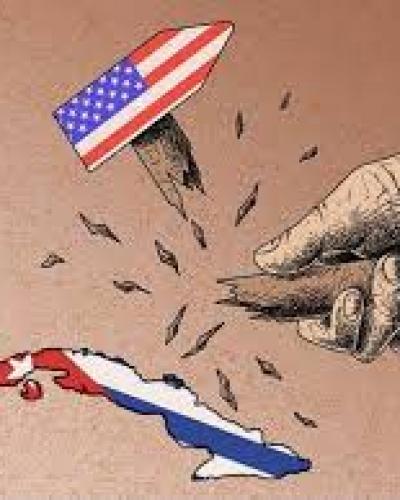 Cambridge, January 2 (RHC)-- With Western economic sanctions against Russia, Iran, and Cuba in the news, it is a good time to take stock of the debate on just how well such measures work. The short answer is that economic sanctions usually have only modest effects, even if they can be an essential means of demonstrating moral resolve, according to Kenneth Rogoff, Professor of Economics and Public Policy at Harvard University, in an article published by Project Syndicate, an opinion web page.

“If economic sanctions are to play an increasingly important role in twenty-first-century statecraft, it might be worth reflecting on how they have worked in the past,” Rogoff explained.

As Gary Hufbauer and Jeffrey Schott note in their classic book on the topic, the history of economic sanctions goes back at least to 432 BC, when the Greek statesman and general Pericles issued the so-called “Megarian decree” in response to the abduction of three Aspasian women. In modern times, the United States has employed economic sanctions in pursuit of diverse goals, from the Carter administration’s efforts in the 1970s to promote human rights, to attempts to impede nuclear proliferation in the 1980s.

During the Cold War, the U.S. also employed economic sanctions to destabilize governments considered unfriendly to the U.S., especially in Latin America, though they do not appear to have played more than a minor role, even where regime change eventually occurred. Economic sanctions on Serbia in the early 1990s did not deter the invasion of Bosnia. Certainly, the U.S. government’s symbolic punishment of chess legend Bobby Fischer (for playing a match in Belgrade that violated sanctions) provided no relief for the besieged city of Sarajevo.

The former Soviet Union played the sanctions game as well – for example, against China, Albania, and Yugoslavia. It, too, did not have much success, except perhaps in the case of Finland, which ultimately bent its policies to gain relief from sanctions imposed in 1958.

As Hufbauer and Schott, among others, have illustrated, the effects of sanctions are often fairly disappointing – so much so that many scholars have concluded that such measures often are imposed so that governments can appear to domestic audiences to be “doing something.” Certainly, severe U.S. sanctions on Cuba failed to bring the Cuban government to heel; indeed, President Barack Obama’s move to reestablish full diplomatic relations may have more effect, the experts said.

One of the major reasons economic sanctions have fallen short in the past is that not all countries have complied. Indeed, significant differences of domestic opinion in the imposing country often undermine sanctions as well.

In a world where nuclear proliferation has rendered global conventional war unthinkable, economic sanctions and sabotage are likely to play a large role in twenty-first-century geopolitics. Rather than preventing conflict, Pericles’s sanctions in ancient Greece ultimately helped to trigger the Peloponnesian War. One can only hope that in this century, wiser heads will prevail, and that economic sanctions lead to bargaining, not violence.

Kenneth Rogoff, Professor of Economics and Public Policy at Harvard University and recipient of the 2011 Deutsche Bank Prize in Financial Economics, was the chief economist of the International Monetary Fund from 2001 to 2003.