Cuba reiterates commitment to peaceful settlement of disputes in the region 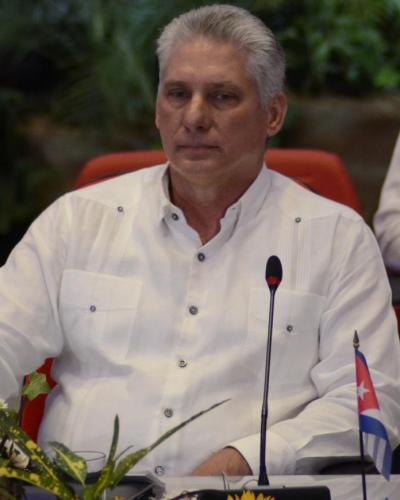 Speech delivered on March 29, 2019, by Miguel Díaz-Canel Bermúdez, President of the Councils of State and Ministers, at the VIII Meeting of the Association of Caribbean States, in Managua, Nicaragua.

Comrade Commander Daniel Ortega Saavedra, President of the sister Republic of Nicaragua and of the VIII Meeting of the Association of
Caribbean States;
Comrade Rosario Murillo, Vice President of the Republic of Nicaragua;
Distinguished Heads of State and Government and Heads of Delegations;
Your Excelency Ambassador June Soomer, General Secretary of the Association;
Dear delegates and guests:

Our National Poet, Nicolás Guillén, singular voice among the great voices of this region, dedicated a short poem to the sea that joins us
with which I would like to greet you. The poem is entitled The Caribbean:

In the aquarium of the Great Zoo,
the Caribbean.
is a maritime and enigmatic animal
It has a crystal crest,
a blue back, a green tail,
a coral compact belly,
gray cyclone fins.
In the aquarium isthis inscription:
«Beware: it bites».

Of this strength that only sustains the union, the very opportune Declaration of Managua that this Meeting will adopt has been born, with the title: "Uniting efforts in the Caribbean to face climate change", the issue that has generated growing concerns in the last decades.

As he warned us almost 30 years ago, at the Earth Summit held in Rio de Janeiro, in 1992, the Commander in Chief of the Cuban Revolution,
Fidel Castro Ruz said: "An important biological species is at risk of disappearing because of the rapid and progressive liquidation of their
natural living conditions: man."

The Caribbean knows this well because it often suffers its impacts. Surely for that reason, since its II Summit, in Santo Domingo, in
1999, the Association of Caribbean States included on its agenda the agreement and cooperation on climate change and disaster risk reduction.

The causes of climate change have been clearly identified by the scientific community and recognized by practically all governments.
But neither the efforts made nor the international commitments in environmental matters are sufficient to stop the alarming increase in
the global temperature and to stabilize it in the environment of 1.5 ºC, as is the claim of the developing countries.

The most developed, who are mainly responsible for today's unsustainable situation, must honor the commitment to provide at least
US $ 100 billion a year in support of the actions of developinSpeech delivered on March 29, 2019, by Miguel Díaz-Canel Bermúdez, President of the Councils of State and Ministers, at the VIII Meeting of the Association of Caribbean States, in Managua, Nicaragua.g countries.

The global commitment to reduce greenhouse gas emissions must prevail based on the principle of common but differentiated responsibilities, and a framework of international cooperation that ensures the resources and the necessary transfer of technologies to developing countries .

It requires the modification of the patterns of production and consumption and the promotion of a fair, democratic and equitable
international economic order to face climate change and achieve sustainable development.

Each one of us understands what is being talked about. The intensity and persistence of natural phenomena of various kinds in the Greater
Caribbean constantly punish us with the adverse effects of climate change, particularly the Small Island Developing States.

Living between cyclones has conditioned our lives; It has modified our geographies and instigated our migrations. And it has also educated us
in the need to study more the phenomena that haunt us and to work to reverse their damages. The Cuban Revolution had to learn very early
and those very hard lessons, from the Cyclone Flora, which in 1963 left the old province of the East under the water and buried more than
a thousand people.

The most recent history tells us that in the worst moments acting together has saved us. We firmly believe that only our unity and joint
cooperation will allow us to face the dangers and effects of meteorological events and assume the subsequent recovery. Solidarity has to be a fundamental principle for the members of the Association of Caribbean States.

Today I want to reiterate the unwavering support of Cuba, in all circumstances, for the right of small island states and developing
nations to receive special and differential treatment in accessing trade and investment.

We also support the demand, just and necessary, to receive cooperation according to their real situation and needs, and not on the basis of
per capita income statistics that classify them as middle income countries and exclude them from the flow of financial resources.
indispensable for development.

We welcome the election of Barbados as President of the Board of Directors of the Association's Council of Ministers. We express our
fraternal congratulations for this and the willingness to contribute during this term.

The President of the United States, the Secretary of State and the National Security Adviser claim that the Monroe Doctrine "is as
relevant today as the day it was written" and that "it has been the formal policy", as in the time of expansion and intervention of the
United States in our region, of military aggressions and impositions in our countries.

These proposals and the consequent actions challenge our Proclamation of Latin America and the Caribbean as a Zone of Peace, signed by the Heads of State and Government, in January 2014, in Havana, on the occasion of the Second Summit of The Community of Latinoamerica and Caribbean States, or La Comunidad de Estados Latinoamericanos y Caribeños, CELAC.

We then declare our permanent commitment to the peaceful settlement of disputes in order to banish forever the use and threat of the use of
force in this region; with strict compliance with the obligation not to intervene, directly or indirectly, in the internal affairs of any other State;
to foster relations of friendship and cooperation among themselves and with other nations, regardless of the differences between their political, economic and social systems or levels of development; to practice tolerance and coexist in peace as good neighbors; the commitment of the States of Latin America and the Caribbean to fully respect the in alien able right of every State to choose its political, economic, social and cultural system, as an essential condition for ensuring peaceful coexistence among nations; to the promotion in the region of a culture of peace based, among others, on the principles of the Declaration on the Culture of Peace of the United Nations.

In this context, our nations need to continue working together. It is our duty to protect, among all, peace and preserve what has been
achieved, confident that the current situation of confrontation and threats will be overcome.

Cuba, in particular, has been subject to an irrational and perverse tightening of the blockade of the United States, whose administration
has unleashed, at the same time, a campaign of manipulations, lies and pretexts to sustain a practice of persecution and harassment that the
international community openly condemns and rejects.

I want to thank, deeply, the stance of all the countries of the region, in opposition to this irrational, illegal and cruel policy
against our people.

Above political or ideological differences, I call on all Caribbean governments to defend peace and oppose military aggression and the
escalation of coercive economic measures against Venezuela that seriously damage its citizens and put at risk the stability of all the
region.

We also reiterate our solidarity and support for the Government of Reconciliation and National Unity of the Republic of Nicaragua in the
face of destabilization attempts, and we celebrate the negotiation process to ensure peace and preserve the social and economic progress
achieved in this sister nation.

Faithful to our vision of defending unity in diversity, as on innumerable occasions the First Secretary of the Communist Party of
Cuba, Army General Raul Castro Ruz, based on forums like this, has called for the continuance of working together, concentrating on what unites us, incomparably superior to the little that separates us, and to prioritize the fulfillment of the agreements of the XXIII Council of Ministers regarding the strengthening and revitalization of the Association.

The Association of Caribbean States should continue to be a mainstay in the unity of the Greater Caribbean, which is the only alternative to the enormous challenges we face.

The member states of this organization share the responsibility to avoid breaking the consensus that we have built together in these
years, and to continue fostering solidarity, as an indispensable premise to develop actions in all the issues that are part of the
organization's mandate.

Cuba will continue working in favor of  the consolidation of our Association, and we hope that this important meeting will contribute
decisively to this.

Thank you very much!