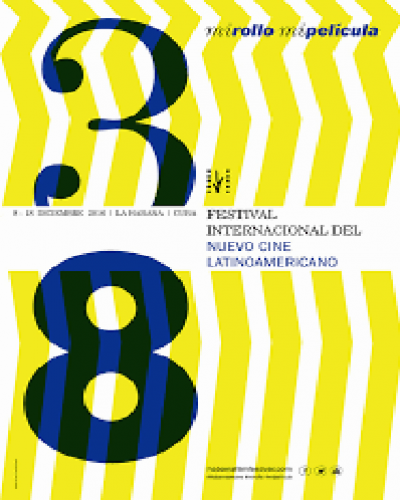 World known Brazilian actress Sonia Braga was presented with the Coral Award as Best Actress for Aquarius by Kleber Mendonça Filho, who also took home the Fipresci and Signis Prizes.

JG: At the awards ceremony held in Havana’s Charles Chaplin Movie Theater, Cuba’s Lester Hamlet took the popularity award for his film Not Like Before or Ya no es Antes, starring Cuba’s Luis Alberto García, who was also awarded the prize as best actor.

Other Cuban movies that took prizes home include Last Days in Havana or Últimos días en La Habana  by Fernando Pérez who was also presented with the Special Prize of the Jury and the Best Sound Track.

GJ: Virtually unknown to most Americans, Havana’s International Festival of New Latin American Cinema, which is always held in the first two weeks of December, keeps getting bigger and better each year and is one of Havana’s and Latin America’s most anticipated annual events.

The 38th edition of the festival received roughly 1500 films that were submitted from the region for consideration, the biggest year ever.  The festival also sought out prizewinners from Cannes, Venice, Berlin and Toronto. All of this turned into a 10-day program that rans in 14 historic theaters all across Havana.

JG: The festival’s awards program involves juried competitions in eight areas and numerous awards, including best unrealized screenplay and even one for the best artistic design of the festival’s poster.

The philosophy is to emphasize Latin films so the areas of competition are only open to Latin American films.  Some are submitted and some are by invitation.  Submissions are opened in January or February.

GJ: The festival’s five programmers go to the big festivals—Berlin, Cannes, San Sebastian, Rotterdam—and some that are not so big but which are important for Latin film.  The programmers go to the principal countries—Argentina, Chile Brazil Venezuela and sometimes Colombia—and go to a festival in Lima, Peru, and two to three festivals in Brazil.  The organizers also attend the Bogota Audiovisual Market (BAM) where they screen films. They invite the films that win the awards and get recognition.  It’s always a combination of films the festival wants and films that are independently submitted.

JG: In the beginning, the festival was more Latin American than international.  In Latin America, almost all the countries have participated and that has just solidified and broadened.  In the beginning, everything was part of the contest.  But then it grew so much that the jurors couldn’t watch 40 or 50 films, so they decided to have separate contests and limit the number of films.  We started with the fiction film category for the contest and, within that, created a prize for the first fiction film and the best short film.  As we grew, and first films became more important, we created the contest for first films. There is also a script contest and th festival receive more than 100 every year.

GJ:  The festival screens the very best films produced in Latin America.  This year in our “Gala” section there were a few films produced by Latin American directors that do not have a Latin American theme or subject per se, but they were relevant.  The “First Film” category keeps better each year.  Over the years, the festival has had 500,000 people attending, very gratifying for the organizers.

JG: There were number of psychologically intense at this festival.  This seems to be a characteristic of current Latin cinema.  I think it’s a reflection of the social and political situation in Latin America right now that is giving rise to this type of story.   They are moving from the militant films up until the 1990’s to films that are more socially engaged and delve into psychological issues.

GJ: Technology was one of the greatest challenges to the featival.  Until about three years ago, cinemas in Cuba only screened 35mm and Blu-ray because they didn’t have any digital projectors.  Inh, 2014, Cuba introduced this technology in two theaters—Charles Chaplin and Yara.  In 2015 there were five theaters but, on the human side, the festival needed to train projectionists and technicians.

Naturally, the festival always ask that films be sent ahead of time so the organizers can work out problems but sometimes the only copy they have is at another festival and they end up carrying the film with them they come.