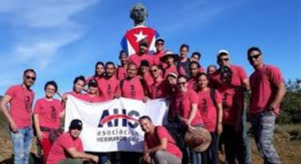 Granma, August 11 (RHC)-- Young Cuban artists, members of the Hermanos Saíz Association of Young Artists in Granma province have also launched a broad program of activities in homage to leader Fidel Castro, on the 95th anniversary of his birth, to be celebrated on August 13th.

Adán Matamoros, president of the Association in Granma province, told the press that climbing the iconic Pico Turquino -Cuba's highest peak- is the main activity by young artists in homage to Fidel.

Other activities include meetings with government and political authorities in the province, performances by local artists with the ‘Rompiendo el cerco’ artistic brigade at Casa del Joven Creador in Bayamo, and a tour of La Demajagua National Park in Manzanillo.

Matamoros stressed that youth climbing Turquino will also pay tribute to brothers Luis and Sergio Saíz, on the 64th anniversary this year of their assassination by henchmen of the Fulgencio Batista dictatorship.

The Hermanos Saíz Association of young artists is named after these two young martyrs of the Cuban Revolution. At the time of their assassination, Luis Saíz was 18 and his younger brother, Sergio, was 17.

Also, in the framework of the 95th anniversary of Fidel Castro’s birth, another group of young artists, members of the Hermanos Saíz Association will visit Fidel's birthplace in Birán, in the eastern province of Holguín.