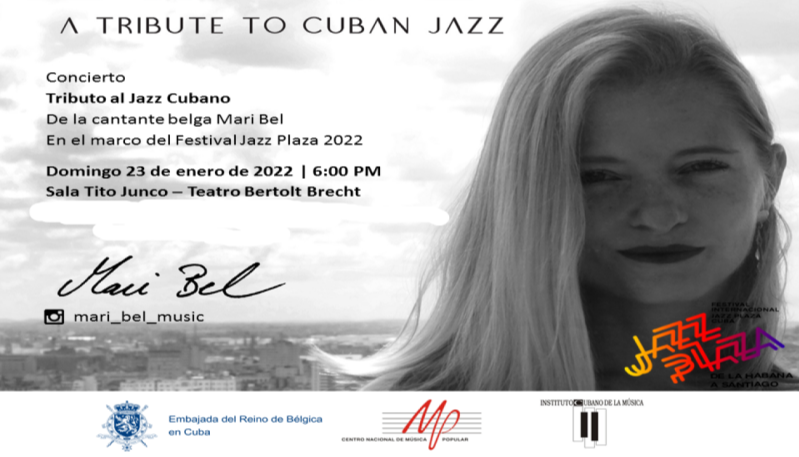 Havana, January 24 (RHC)-- Belgian singer and composer Mari Bel presented her album ‘Encuentro. Tributo al Jazz Cubano’ over the weekend during a concert at Bertolt Brecht Theatre in Havana, in the framework of the 37th Jazz Plaza Festival.

Bel, who resides in New York, has returned to Havana, where she served at the Belgian Embassy in the Cuban capital some years ago.

A jazz and Latin music lover, Bel recorded two albums here in Havana. The first one was ‘Havana Home’, recorded in 2018 along with a group of young talents. It includes Cuban style versions of international songs. Her second and latest musical production ‘Encuentro. Tributo al Jazz Cubano’, includes her own compositions inspired by the time that she lived here in Cuba.

The project emerged from frequent jazz jams at the residence of Mari Bel here in Havana, while she was serving at the Belgian embassy. It allowed her to exchange with several Cuban musicians and get to master Cuban rhythms like son, salsa and cha cha cha.

Argentinian bassist Javier Malosetti and his band La Colonia, in his first ever performance in Cuba, offered a concert in the framework of the just concluded Jazz Plaza Festival.

‘Coming to play my music in this land of music is a dream come true and at the same time a challenge,’ Malosetti told the press at the Abelardo Estorino hall of the Ministry of Culture.

Malosetti further said: ‘What we’re doing here is sowing a seed that we’re sure will grow and will bring many good things. Thanks to this Festival, I have met great musicians and we’re already doing great things together and we will continue doing great things regarding music.’

‘Music has this, it allows you to mix, combine different styles, cultures, different times in perfect harmony. Humanity should learn this lesson and save itself,’ said the Argentinian musician.

The multi-award-winning artist is a reference for several generations of musicians. Malosetti and La Colonia first offered their art to the Cuban audience at the Avellaneda Hall of Teatro Nacional. Guest artists included Cuban musician Alaín Pérez, whom Malosetti described as an excellent bassist.

During the long-awaited concert, the Argentinean musician performed tunes from his vast repertoire and also tracks works from his latest album ‘Malosetti & La Colonia’, which earned him the coveted Gardel Prize for Best Jazz Album.

Javier Malosetti performed yet a second time on Sunday, the closing day of Jazz Plaza, as a guest artist during the concert of also Argentinian Rodrigo Sosa, dedicated to Argentinian music. Malosetti sang the tune ‘Cielo de ti’ as a duet with Cuban Eme Alfonso.