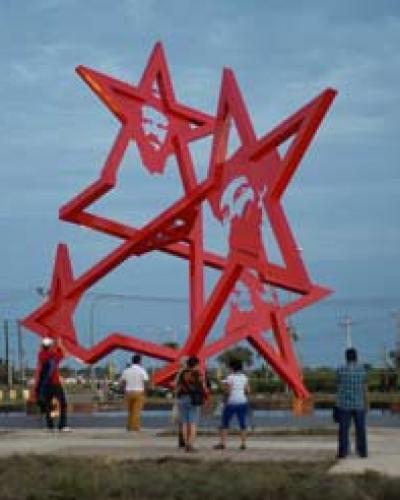 The largest sculpture complex in the central-eastern city of Camagüey, dedicated to Cuban Revolution leader Camilo Cienfuegos, was unveiled to mark the 54th anniversary of his disappearance.

The 11-meter-high complex is by famous Cuban sculptor, José Villa Soberón, known worldwide by works, such as the bronze figurative statue of English singer-songwriter and ex-Beatle, John Lennon, sitting on a bench at a Havana park; the statue of late Cuban musician and singer, Benny Moré, in Prado Promenade in the south-central city of Cienfuegos; and others, such Mother Theresa of Calcutta and the Knight of Paris in Old Havana.

With the opening of the piece erected at a round-about on one of the city’s main avenues, the sculptor and the Cuban people pay tribute to Camilo Cienfuegos, known as a simple man who emerged from the grass roots and the people of Cuba.

Camilo Cienfuegos (1932-1959) was an inseparable friend of legendary guerrilla and Commander Ernesto Che Guevara, and was one of the main pillars of the war and struggle to overthrow the pro-imperialist Batista dictatorship on January 1, 1959.

After the revolutionary victory in 1959, he was named Head of the Rebel Army’s Chiefs of Staff. The Cesna plane on which he was traveling from Camagüey to Havana, after thwarting a counterrevolutionary uprising, disappeared on October 28th, 1959, and was never found, despite hard and desperate efforts inland and offshore to find it. That day every year Cuban children and adults throw flowers to the ocean and river banks to pay homage to the great leader.

The monument includes water as a symbol of the ocean where the plane he was traveling on is believed to have fallen.