Hemingway's Old Man and The Sea 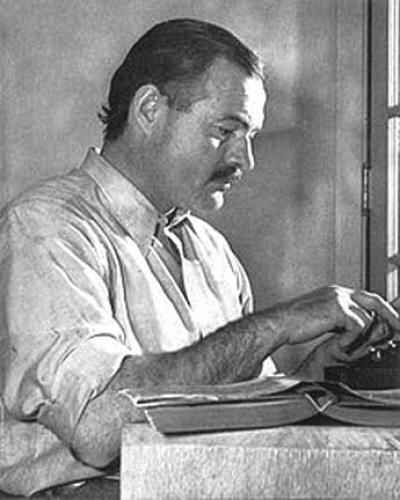 GJ: Hi GJ here with Perla Masso. Welcome to RHC’s From the Bookshelf.

PM: Yes, Hello there! Today we are going to talk about a slim little book that’s famous in Cuba and around the world: Earnest Hemingway’s The Old Man and the Sea.

GJ: This has got to be one of the best known pieces of short fiction!

PM: Yes! The Old Man and the Sea is one of Hemingway's most enduring works. Written in language of great simplicity and power, it is the story of an old Cuban fisherman, down on his luck, and his supreme ordeal -- a relentless, agonizing battle with a giant marlin far out in the Gulf Stream.

GJ: When did the book come out?
PM: Written in 1952, the novella confirmed Hemingway’s power and presence in the literary world and played a large part in his winning the 1954 Nobel Prize for Literature.

GJ: What’s the book about?

PM: Here Hemingway recasts, in strikingly contemporary style, the classic theme of courage in the face of defeat, of personal triumph won from loss. The Old Man and the Sea tells the story of a battle between an aging, experienced fisherman, Santiago, and a large marlin.

GJ: How does the tale begin?

PM: The story opens with Santiago having gone 84 days without catching a fish, and now being seen as what the Cubans call "salao", the worst form of unluckiness. Santiago tells Manolin, his young apprentice, that on the next day, he will venture far out into the Gulf Stream, north of Cuba in the Straits of Florida to fish, confident that his unlucky streak is near its end.

PM: Marlins are the so-called blue-water fish, spending most of their lives far out at sea. They are migratory, and will follow warm ocean currents for hundreds and even thousands of miles. Native to the tropical and temperate waters of the Atlantic, Pacific, and Indian Oceans, the strikingly beautiful blue marlin is cobalt-blue on top and silvery-white underneath, with a pronounced dorsal fin and a long, lethal, spear-shaped upper jaw.

GJ: Wow! Take us back to the story.

PM: On the eighty-fifth day of his unlucky streak, Santiago takes his skiff into the Gulf Stream, sets his lines and, by noon, feels his bait taken by a big fish, deep in the water, that he is sure is a marlin. Unable to haul in, Santiago’s skiff is instead pulled by the fish, and two days and nights pass with Santiago holding onto the line.

GJ: And what happens?

PM: On the third day, the marlin surfaces and begins to circle the skiff. Santiago uses all his remaining strength to pull the fish onto its side and stab it with a harpoon. He straps the marlin to the side of his little boat and heads home, thinking about the high price the fish will bring him at the market and how many people it will feed.

GJ: And the sharks?

PM: Sharks, of course, are attracted to the marlin's blood. Santiago kills a great mako shark with his harpoon, but he loses the weapon. He makes a new harpoon by strapping his knife to the end of an oar. Five sharks are killed and others are driven away. But the sharks keep coming, and by nightfall the sharks have devoured everything except the head and the spine of the once huge marlin.

GJ: How does the story end?

PM: The boy, Manolin, worried about the old man, cries upon finding him safe asleep in his shack. The boy brings him newspapers and coffee. When the old man wakes, they promise to fish together once again. On going back to sleep, Santiago dreams of his youth—of lions on an African beach.

GJ: What was the reader’s response to Hemingway’s The Old Man and The Sea?

PM: Written in 1951, and published in 1952, the book is Hemingway's final full-length work published during his lifetime. The book was featured in Life magazine on September 1, 1952, and five million copies of the magazine were sold in two days.

GJ: How did the actual book perform in the market?

PM: Published in book form on September 1, 1952, the first edition print run was 50,000 copies. The Old Man and the Sea became a Book of the Month Club selection, and Hemingway became a celebrity. In May 1953, the novel received the Pulitzer Prize and the title was specifically cited when he was awarded the Nobel Prize in Literature in 1954.

GJ: How did this affect Hemingway’s career?

PM: The novel restored many readers' confidence in Hemingway's capability as an author. It prompted a reexamination of his entire body of work.

GJ: What did the critics have to say?

PM: Joseph Waldmeir's essay Confiteor Hominem: Ernest Hemingway's Religion of Man is a favorable critical reading of the novel, and one which has defined analytical considerations since. Perhaps the most memorable claim is Waldmeir's answer to the question: what is the book's message?

GJ: And the answer?

PM The answer assumes that The Old Man and the Sea must be read as an allegorical commentary on all of hemingway’s previous work.

GJ: And on the negative side?

PM: One of the most outspoken critics is Robert P. Weeks. His 1962 piece Fakery in The Old Man and the Sea presents his claim that the novel is a divergence from the typical, realistic Hemingway.

Weeks contends: The Old Man and the Sea, is pieced out with an extraordinary quantity of fakery, extraordinary because one would expect to find no romanticizing of natural objects in a writer who deplored Melville's rhetoric in Moby Dick, and who was himself criticized by other writers, notably Faulkner, for his devotion to the facts.

GJ: Why did Hemingway write the Old Man and the Sea?

PM: Furious at the critical reception of his novel Across the River and Into the Trees, he wrote the draft of The Old Man and the Sea in eight weeks, saying that it was "the best I can write ever for all of my life".

GJ: The Old Man and the Sea was of course adapted for the screen.

PM: According to Leland Hayward, the film's producer, Hemingway was pleased with the film, and said it had "a wonderful emotional quality” and that he was “very grateful and pleased.”

GJ: Perla, how would you describe Hemingway’s style?

PM: Hemingway's writing style owes much to his career as a journalist. His use of language — so different from that of, say, his contemporary William Faulkner — is immediately identifiable by most readers. Short words, straightforward sentence structures, vivid descriptions, and factual details combine to create an almost transparent medium.

GJ: You wouldn’t say then that Hemingway is merely blunt?

PM: No! Without calling attention to itself, his language resonates with complex emotions and larger and larger meanings — displaying his skill in his use of such subtle techniques as sophisticated patterns; repeated images, allusions, and themes; and repeated sounds.

GJ: How does this style emerge in The Old man and the Sea?

PM: Nearly every word and phrase points to Hemingway's devotion to precision. Hemingway himself also claimed that he wrote on the "principle of the iceberg," meaning that "seven-eighths" of the story lay below the surface. The Old Man and the Sea reflects Hemingway's success in conveying as much as possible in as few words as possible. The novella's brevity, ostensibly simple plot, and distance from much of the period's political affairs all lend the book a simplistic quality that is as deceptive as it is endearing.

GJ: Well, Perla Masso, I am as captivated, as I’m sure is our audience, by what you’ve told us about Hemingway’s The Old Man and the Sea. Next time Gerwyn Jones is in the hot seat and it’s you chance to grill me on From The Bookshelf. Until then, Ciau!