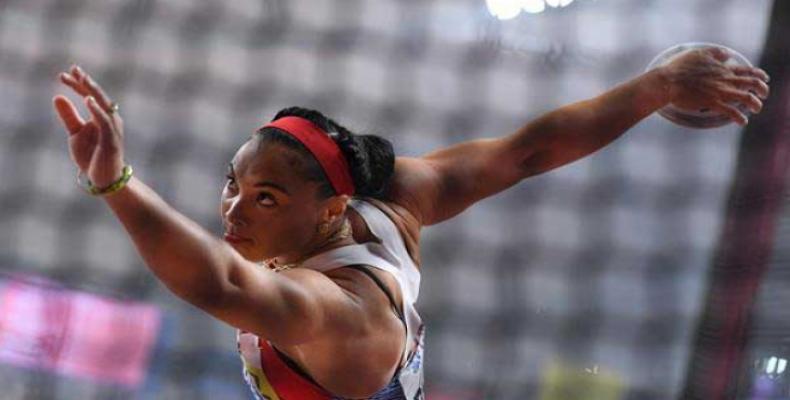 Yaimé Pérez washed away the pain of previous global championship disappointments to seal the world title in a compelling battle against her fellow Cuban Denia Caballero.

The 28-year-old Pérez finished fourth at the two previous IAAF World Championships and no-marked in the Olympic final having led the qualifiers but showing impressive composure inside a pumping Khalifa International Stadium she finally delivered with a best of 69.17m.

The performance was particularly impressive as she had suffered an injury just three days before the competition, which raised big questions marks about her participation.

Her compatriot and 2015 world champion, Denia Caballero, secured silver courtesy of a 68.44m throw to ensure the first women's discus one-two at a World Championships for 32 years.

Sandra Perkovic, the two-time former champion, who has endured an injury-troubled season, claimed bronze with 66.72m for a fourth successive World Championship medal.

The lithe and athletic Pérez, who operates with devastating speed in the circle, established early control of the competition with a 68.10m effort in round one. Perkovic responded with a 66.72m effort – to show she was in no mood to relinquish her title without a fight.

The big mover in round two was Caballero. After a first-round foul she fired the 1kg discus out to 66.80m – to surpass Perkovic by 8cm and grab second.

There was no change to the medal picture in round three although Caballero strengthened her hold on silver with a 67.32m hurl.

With the big three sat pretty in the medal positions the halfway stage saw the elimination of French veteran and two-time former World Championship medallist Melina Robert-Michon, who could only summon the best of 59.99m and Diamond League final podium finisher Kristen Pudenz (57.69m) of Germany.

The competition exploded into life in round four. Played out to the raucous noise generated by the men's high jump final, Caballero elevated herself into gold with 68.44m – just 34cm ahead of her compatriot. Refusing to lay down and surrender Pérez produced a 68.01m effort but could not claw herself back into gold.

"I am happy and grateful to my physiotherapist Abdel Murgia," she said of the man who made it possible for Pérez to compete following the injury mishap. "My life could not be long enough to thank him for the medal. This is my fourth World Championships. I always arrive in top shape but always left without a medal. It shows that you should never give up. I persevered and earned my medal."