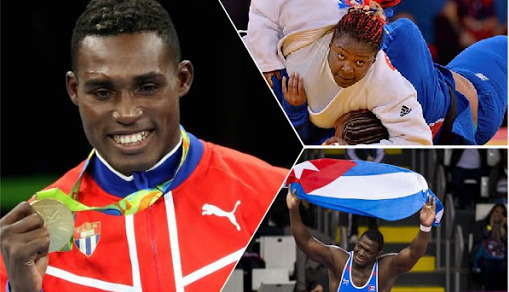 Havana, December 28 (RHC)-- Cuban sports could not achieve much in 2020 because of limited international participation due to the COVID-19 pandemic, although it had flashes in boxing and baseball and continued preparations for next year's Olympics in Tokyo.

Earlier this year, the gladiators secured 10 tickets to Tokyo at the Pre-Olympic Games in Ottawa, Canada, bringing the island's total to 12 in the centennial sport, two more than in Rio-2016.

In the Canadian capital, Cuba secured six passports in the Greco-Roman style, three in the free style and another three in the women's style, which joined another two obtained in the previous year's World Cup.

One of the divisions that has already guaranteed its place is the 130 kg (Greek style) division, where the star Mijaín López will seek the feat of winning his fourth title in the Japanese capital, which would make him the most successful wrestler in Olympic history.

Another category with its place in the pocket is the 67 kg, where the Rio-2016 champion and double world champion Ismael Borrero has no rivals on the island. After an obligatory stop in his preparation when contracting the COVID-19 (April), he has continued his training without difficulties.

In the midst of the confrontation with the COVID-19, which forced the cancellation of almost the entire competition calendar, the athletes appealed to initiatives to keep in shape. They prepared at home, sometimes with rustic implements, and in sports like taekwondo, chess, weights and in races like Marabana they competed virtually.

Those committed to the Olympic appointment concentrated on training bases in provinces where the effects of the pandemic were minimal, and since September about a hundred of them concentrated on the main high performance centers of the country with their eyes on Tokyo.

Baseball continued to bet on signings in foreign leagues, which expanded in Japan and extended to some leagues in the Caribbean.  Several players even interrupted their presence in the Cuban National Series, the only national championship held due to restrictions before the COVID-19, by signing contracts in the professional leagues of Mexico, Venezuela and Nicaragua.

The biggest applause came from those signed up in the main league of Japan (NPB), where Liván Moinelo, Alfredo Despaigne and Yurisbel Gracial were once again key players in the fourth consecutive crown of the SoftBank Falcons, a club that announced for next season the arrival of another Cuban, pitcher Andy Rodríguez.

Moinelo signed his best campaign, in which he led the way in hold points and finished with notable numbers in punch per inning and cleanup average, which led him to dispute the Most Valuable Player (MVP) award.

Other outstanding players in Japan were Chunichi's Dragons Raidel Martinez, second in saves in the Central League (21), the club's own starter Dayan Viciedo, winner of the Golden Glove, and outfielder Leonys Martin (Lotte's Marinos), fourth in home runs (25).

In South Korea's Professional League, Jose Miguel Fernandez took the lead in hits (199) and was among the first in average, while in Mexico Erisbel Arruebarruena had a fleeting appearance due to her decimated health, although she stood out with 10 home runs in 29 games and an average of 333.

Volleyball took another step in hiring figures. Some 20 players were inserted in foreign leagues with the endorsement of the Cuban Federation, this time to some very prestigious European leagues such as those of Italy and France, while the talented Miguel Angel López was signed by the famous Sada Cruzeiro of Brazil.

As part of the strategy for the development of Cuban sport, the Cuban Football Association (AFC) included in its register five soccer players who reside abroad - including Onel Hernández (Premier) and Marcel Hernández (goal scoring leader in Costa Rica) - following in the footsteps of disciplines such as volleyball, baseball and handball.

Jasiel Rivero excelled with the San Pablo Burgos in Spanish basketball, with which he made history by reaching the semifinals in the ACB League and taking the title in the Champions League, the second highest level tournament in that sport in Europe after the Euroleague.

At the end of the year, elite matches were held in boxing, wrestling and judo, essential sports for Tokyo, and the National Baseball Series, the only national competition to be held, was held without major setbacks with special health measures and without an audience. However, it was impossible to avoid the scourge of COVID, and more than three months after its launch, more than a dozen positive results were detected in the Industrial team.

Parity has characterized the series, in which 8 of the 16 teams have advanced to the playoffs, and in the individual order young people like César Prieto and veterans like Frederich Cepeda have stood out.

Prieto, 21 years old and a mainstay of Cienfuegos, has been the sensation of the tournament, breaking the records of most consecutive games by hitting (45) and of hits for series of 75 games (126 to date). He is also the leader in offensive average (406) and doubles (21).

Industriales' starter Lisván Correa improved the record of home runs for 75-game seasons (25) and Cepeda, from leader Sancti Spíritus, reached 400 doubles for life and became the only player in national series with more than 2000 hits, 300 home runs and 400 doubles.

Taking advantage of the break by the COVID-19, INDER has repaired or rescued during the year several sports facilities throughout the island.