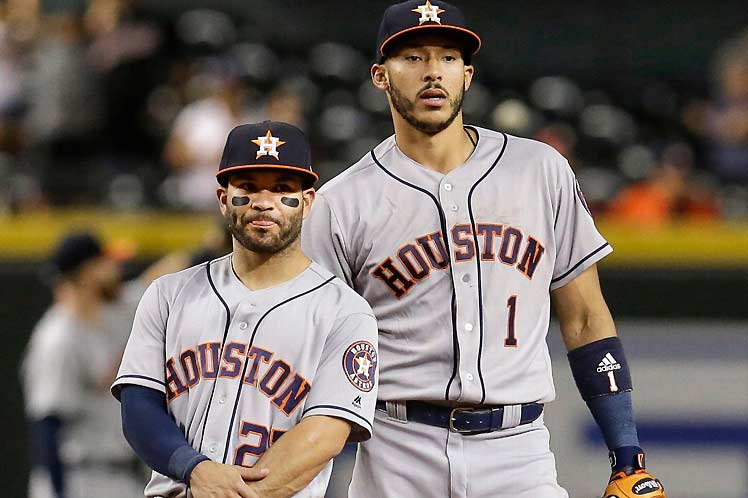 Venezuelan José Altuve and Puerto Rican Carlos Correa connected key hits for the Houston Astros' 5-4 victory over the Boston Red Sox, in the start of the American League Championship Series in U.S. baseball.

At Houston's Minute Maid Park and in front of more than 40,000 fans, the locals reached the bottom of the sixth inning with a 1-3 deficit, but Altuve connected with a ball thrown by reliever Tanner Houck with a teammate on base, and with his 20th home run in the MLB playoffs -third in history- tied the duel.

One inning later, the Puerto Rican slugger Correa gave the Astros the lead with his 18th homer in the postseason, to share the seventh place in a lifetime, and Altuve himself drove in his team's fifth and decisive run in the eighth with a sacrifice fly.

The hosts' other run in the start of the young circuit's Championship Series was brought to the plate by Cuban patrolman Yordan Álvarez in the same first episode.

Boston did its most damage in the four-hour game in the third, when Puerto Rican center fielder Enrique 'Kike' Hernández hit a two-run home run, the first of his two of the night, off Dominican left-handed starter Framber Valdez to lead a three-run rally.

Neither Valdez, nor Red Sox left-hander Chris Sale, contributed much from the mound in their starts, and both went to the showers early, walking two chapters and two thirds with six and five hits allowed, respectively, despite having good velocity in their straightaways, Valdez 94 and 95 miles per hour and Sale 96.

Houston's manager, Dusty Baker, used seven relievers, and Ryne Stanek achieved the victory with only one opponent retired, while Ryan Pressly was credited with the save, but not before allowing in the ninth inning the second home run by Kike Hernández, who has shined with the lumber in the 2021 playoffs and in the game he batted 5-4.

The loss for Boston was taken by the Dominican Hansel Robles, the fifth of the seven relievers sent to the mound by mentor Alex Cora.

This Saturday, both teams will meet again in the second game of the Championship Series, with Venezuelan Luis García on the mound for the Astros and supersonic right-hander Nathan Eovaldi with the mission to even the duel for the Red Sox.

On the other hand, the Los Angeles Dodgers and Atlanta Braves will begin the battle for the pennant and the ticket to the National League World Series.